The first generation 9-5 was SAAB‘s flagship model when it was released in 1997 (as a ’98) in Europe, and 1998 (as a ’99) in the US. It was the successor to the SAAB 9000, which sold very well by Saab standards, and production continued through 2009 when they released a new model under GM’s supervision. The final worldwide production numbers of the gen1 totaled just under 500,000 units and were about half and half sedan/wagon.

The first generation 9-5 had two drastic changes during its production, the first was a facelift for the 2002 model year, and the second was a significant facelift for 2006. Saab upgraded the 2002 model to plastic headlight lenses, with Xenon HID’s available. Subtle stylistic and technical changes appeared all over the car. 2005 saw another subtle facelift, with slightly different bumpers. In 2006 the 9-5 received a wholly revised exterior styling package, with much of the interior being changed to GM sourced parts-bin components.

Other than these few things, throughout the entire run, the 9-5 changed little. Currently, the Saab 9-5 is very cheap to acquire, compared to its $40k+ price tag that it wore new, as well as the 9-5’s aftermarket parts. This guide should help people understand some of the most common replacement parts and repair their car may need to enjoy a well-maintained executive ride.

The first generation of the B235 2.3 liter 4-cylinder turbo engine suffered some major oil-related problems. On the 9-5, the PCV system inadequately vented the engine, resulting in the sludgy buildup and ultimately engine failure. This affects model years 99-03. However, the problem was caught, and the 2004 model year had a revised system that fixed this problem.

SAAB released a PCV update parts kit to retrofit early 9-5’s to the newer, more effective PCV. Nearly all 9-5’s at this point would either have the updated Saab parts installed, or have suffered an engine failure. Only full synthetic oil should be used in these SAAB turbo engines and replace the PCV system every few years, depending on mileage. The Saab part number for the PCV kit is 101k10053. 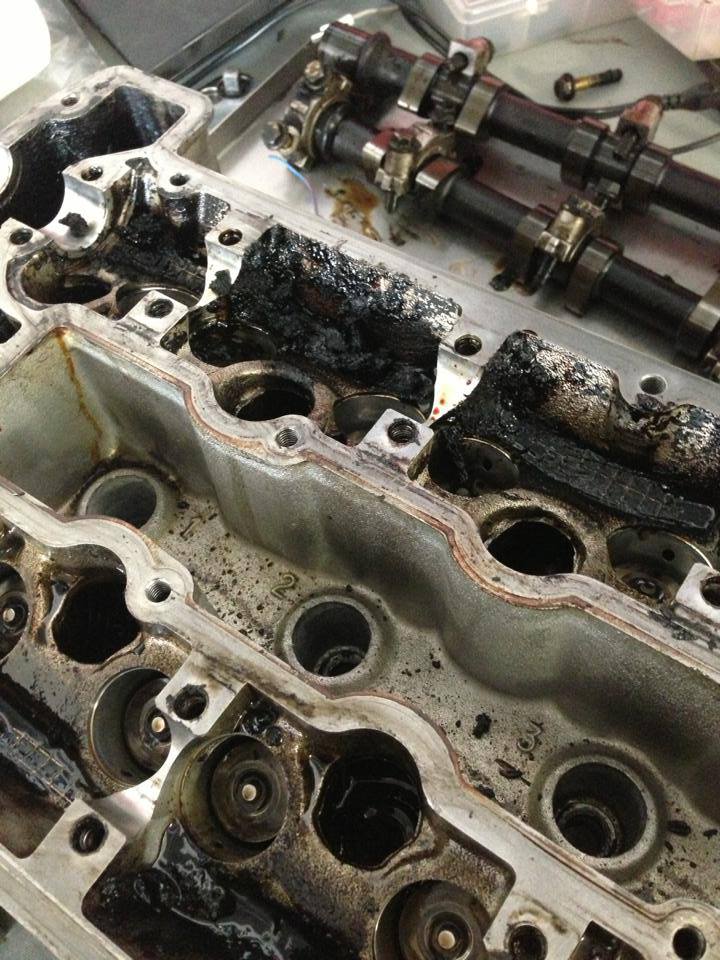 If you notice the interior HVAC ventilation system on your 9-5 acting up, try this: press and hold the AUTO and OFF button on your ACC system. This will begin the automatic self-test, and when completed, ideally, you should end up with 0 – 0. The number on the left means number of codes, and the number on the right gives error codes, if any.

What you don’t want is the dreaded 1 – 08. This signals a problem with the left side blend door and usually means the actuator shaft is broken. To fix, use this door repair parts kit numbered [click here]. The SAAB dealer requires replacement of the entire heater box to fix this problem, and I would say our price is significantly lower. Here is a list of other ACC fault codes.

The B235-series engine can provide a lot of torque, which can be quite stressful to the engine mounts holding the drivetrain in place.

The SAAB Trionic system uses a coil-on-plug coil pack called a DIC (Direct Ignition Cassette).  This part feeds back data to the ECU on how the engine is performing using the spark plugs as sensors and is highly prone to failure.  When the DIC part fails, it will throw check engine light codes for misfires, and performance will dramatically suffer.  Sometimes, a catastrophic failure can leave you on the side of the road, which is why many SAAB owners tend to carry a spare around with them in their trunk.  A clue to a fried DIC would be a burning electronics smell in your engine bay after stopping.  Before you replace your DIC, you should replace the spark plugs first.  Bad spark plugs will also cause misfires and poor performance.  The 9-5 uses a black DIC.

The electronic throttle body in the 4cyl 9-5 is historically prone to failure.  Clues to a bad throttle body can be surging throttle, especially at idle or in cruise control mode.  The reason for the problem with these parts is the bundle of wires on the circuit board deteriorates and shorts out, due to the amount of heat and wear associated with being right on top of the engine.  The throttle body also contains the throttle position sensors. Those sensor parts feed the ECU crucial data on how to manage the entire engine.

Sometimes poor idle performance can be fixed by simply cleaning the throttle body, which can get quite gunked up from oil from the PCV system.  Unfortunately, the only sure fix is to replace the throttle body parts if the wires are deteriorated and/or shorting.  Some companies rebuild these parts for the 9-5, but I have heard reports of early failures associated with rebuilt throttle bodies. The 99-03 9-5 throttle body is most susceptible to failure – the exact part number is 9188186.

Little known fact that the radio antenna on the SAAB 9-5 is made up of the electrically conductive lines composing the rear window defroster.  These lines can become broken, causing the radio to go instantly static when you hit the defrost button in the morning.  If you’re the type to boot up that radio first thing in the morning as you leave for work, then having to choose between static and vision is a rude awakening.

To fix, first find the broken/high resistance lines with an ohm meter.  You can also take a picture with your phone on that first frosty morning to see which defroster lines aren’t connecting.  Then pick up a tube of conductive epoxy, mask the window off with tape, and reconnect the defroster lines.  Once free from electrical interference, you should be able to use both the radio and the defroster at the same time.

Broken window rollers plague SAAB and Volvo owners.  The window regulator part rolls on a track that moves in a scissoring motion to allow the window to go up and down.  All these pivot points ride on plastic rollers that become smooshy and eventually break.  This will cause the window to fall down into the door and cease operation.  Luckily the repair is cheap, just pick up a few of these rollers, take the door card off, and install the replacement parts.

Most cars have a valve of some kind that diverts coolant from the engine cooling system, into the cabin, and through the heater core to produce heat on cold days.  The valve on the Saab 9-5 has historically been prone to failure, which can result in all the parts of your cooling system emptying onto the ground.  This valve is a very important part to replace PREEMPTIVELY before this happens.  It is quite cheap, and preventative maintenance might keep you from being stranded on a cold day.  We have a few options for replacement parts, but it’s always recommended to go with the best quality parts you can realistically afford. Check out our replacement 9-5 coolant bypass valves.

Like the Coolant Bypass Valve, the Fuel Pump is another Saab 9-5 part THAT WILL FAIL at some point.  A failed fuel pump can take many forms, but my personal experience was that of a fail-to-start condition outside of a sandwich shop on lunch break.  The fuel pump is an easy DIY job, so if you come up with some spare dough and your car is getting far along in miles, it’s a good idea to replace this part on your 9-5 before it leaves you stranded somewhere.  We have a few options for a replacement 9-5 fuel pump, but we recommend going with the OES Walbro pump.

Here are the SAAB 9-5 Fuel Pumps that eEuroparts.com carries. And here is a quick video on how to change the fuel pump in 99-06 models.

The Crankshaft Position Sensor is one of the more misdiagnosed parts on the SAAB 9-5, as a failed sensor often results in a no-start condition. The CPS detects the position of the crankshaft (and, in turn, other engine parts such as pistons, camshafts, and valves) so that the ECU knows precisely when to fire fuel injectors and spark plugs. The main cause of failure for this sensor is the heat from being bolted directly to the engine block. This results in failures commonly occurring while the engine is hot. Sometimes letting the engine cool down will allow the sensor to get a good reading once again, and the engine will start. If this happens, replacing the CPS parts should be in your future. The Saab 9-5 CPS part number is 0261210269.

If you have another SAAB model vehicle and are experiencing any of the issues above, then the repair should mostly be the same and you just need to find the right Saab part numbers for that model. Check out our other parts for any Saab automobile. If you are not sure what car part you should order, our team of dedicated customer support technicians is standing by to answer all of your questions.