Seeing engine oil anywhere except on the inside of the engine is enough to get the heart rate going. This is especially true for BMWs. If you own an M50/M52/M54 inline-6 engine or any of its derivatives, you need to pay extra attention to one particular area under the hood.

The oil filter housing gasket is a rubber gasket that sits between the engine block and the oil filter housing. It’s there to make it airtight and prevent any oil from leaking out. When it fails, you’ll have to get it fixed before it causes more issues.

Doing so involves removing the oil filter housing and a few other steps we’ll talk about later in this guide. Overall, it is a fairly simple job that you can DIY in your garage since you won’t be needing any specialized tools.

That being said, before you can get started, you have to catch the problem. Here’s how to troubleshoot the leaking oil filter housing gasket issue.

Your car will give you 3 distinct indicators that there’s an issue with your oil levels. Although
these can mean a lot of things, they can also point to a faulty oil filter housing gasket.

Your BMW is equipped with a Low Engine Oil Light and a Low Oil Pressure Light that illuminates on your dashboard when there is an issue with the engine’s oil level. A faulty oil filter housing gasket will most likely cause an oil leak, so your lights could come on when the level drops below minimum values.

Oil Leak Under the Car

Oil spilling from the filter is another clear indication that the oil filter housing gasket needs to be replaced. When this happens, there is usually a pool of oil underneath the car.

However, keep in mind that your skid plate could catch the leak, thus masking the issue until the pool of oil starts grows pretty large. Take a flashlight and inspect the oil filter housing gasket if you notice a puddle of oil under your vehicle.

Engine oil is under slight pressure to assist it to reach where it needs to go all around the engine. If the oil pressure gauge on your instrument cluster starts to drop, the oil filter housing gasket may be at fault. Any significant and persistent drops in oil pressure should be treated seriously. If you get a low oil pressure warning, immediately pull over and turn off the engine. Running an engine with no oil pressure can cause irreparable damage to key engine internals.

The latter S series engines are high-performance, low tolerance engines that won’t tolerate the lack of lubrication. Either way, it’s important that you get on top of any oil leak on time.

Taking the oil filter housing apart and removing it from the engine might look like a difficult process, but you’ll only need basic tools and a few parts to get the job done.

You will have to disconnect the VANOS oil line, accessory belt, and AC belt while changing the oil filter housing gasket. Because of that, it’s a good idea to replace these parts as well, since you’re already in there. However, this is definitely not mandatory. You should also think about changing your oil and oil filter.

How to Perform the Oil Filter Housing Gasket Change

During this repair, you’ll be disconnecting your alternator, so remember to disconnect your battery. This is the most important first step whenever you’re messing around with an engine, especially if you’re working with any electrical components. Disconnect the battery before taking anything off the engine.

Forgetting this step might have a very dangerous outcome. With that out of the way, here are the step-by-step instructions on how to get a new oil filter housing gasket on your car, by yourself!

Remove the cap on the belt tensioner pulley first. Using the T50 Torx, turn the center of this pulley counterclockwise. This should take most of the tension off the belt and you should be able to pull the belt off of the pulleys.

The alternator is connected to the oil filter housing with two 16 mm bolts. They need to come off. The lower bolt is held in place by a 17 mm nut that is located behind the alternator. Get a box wrench and use it to hold the nut in place while you undo the 16 mm bolt.

You should be able to rotate the alternator to get to the wires on the back and remove them. Remember to unbolt them before removing and don’t worry about mixing them up since the positive and negative terminals are of different sizes.

Two 13 mm bolts are used to hold your power steering pump in place. There is another bolt between the pump and the oil pan, but you should leave that one in place since the pump is still connected to the power steering system.

Now onto replacing the gasket. First, remove the oil filter. This will let the oil drain into the pan, and you will avoid making a mess.

The air filter box is kept in place with two 10 mm bolts, but you shouldn’t forget to take off the Mass Airflow sensor clips. After that, you should be able to pull the box out easily. 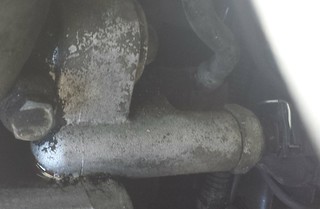 You will find the oil pressure sensor at the back of the oil filter housing. You should be able to pull it out by squeezing the wire sticking up from the clip and pulling the whole thing out.

Remove the banjo bolt holding the VANOS line in place at the front of the engine using the 19 mm box wrench. The other end is attached to the oil filter housing and will come out with it.

You need to remove six 13 mm bolts that hold the oil filter housing in place. Don’t mix these bolts up because they have different lengths, so they will only fit their original hole. 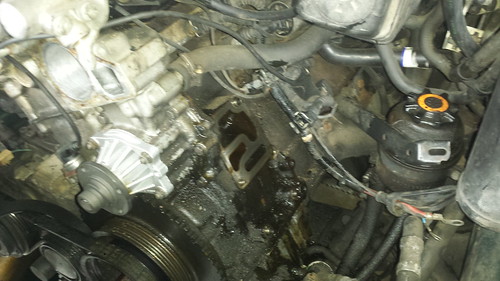 Once the housing is removed, you’ll have a mess of old leaked oil to deal with!

At this stage, you should clean up any spilled or leaked oil from your engine bay, so you can easily tell if there is a new leak when you are done.

Don’t forget to shove a rag in the openings from the parts you took apart, otherwise, debris might end up in your engine block while you are cleaning.

Remember to lubricate the gasket using a small amount of oil for it to not pinch during reassembly.

Step 11 – Swap the Lines on the Oil Filter Housing

When you put in the banjo bolt, swap the lines on the oil filter housing, putting new crush washers on each side of the line, but don’t tighten it until everything is lined up perfectly.

The oil pressure sensor wire will attach easily to the back of the oil filter housing.

Connect the wires of your battery and start your engine. Remember to look for oil leaks in your engine bay to determine if you have done the job correctly.

Where to Get the Parts for Oil Filter Housing Gasket Change?

Using the information provided above, you should easily diagnose if your BMW needs an oil filter housing gasket change. If you do, simply head over to our store, and you’ll find the largest selection of quality gaskets and parts for your BMW!

Select your car’s year, make and model from the drop-down menu, and you will be directed to a list of parts specific to your vehicle. Remember to use only genuine, OEM, or quality aftermarket parts on your car!