Emblems are a small but important aesthetic detail that gives any BMW its character. Without one, the vehicle looks incomplete, almost as if someone took its soul away. Sometimes that’s exactly what happens. Someone will come by and take the emblem, but sometimes it gets damaged due to exposure. Either way, replacing the BMW emblem is something many owners need to do sooner or later. It’s a simple fix too. All you need are simple tools and a minute of your time. Let’s get to it!

The Roots of BMW Emblem – The Bavarian Propeller Story

Whether you’re a fan of BMW or you’re indifferent towards this brand, one this is clear – the BMW emblem is one of the most recognizable emblems in the automotive industry. It’s one of those symbols just about everyone recognizes, no matter where they see it.

The story behind the logo is every bit as interesting as the cars but often overlooked. For example, most people don’t know that the emblem represents the inverse colors of Bavaria – the region of Germany BMW is from.

Is It or Isn’t It a Propeller?

One of the most popular bits of trivia regarding the emblem is the story about its origin. Over the years, it became common knowledge that the logo actually represents an airplane propeller mid-spin.

After all, BMW did make aircraft engines back in the day, so this makes perfect sense, right? Or does it? The company has rectified the notion that the BMW logo represents a propeller, stating that it was a rumor that started back in the 1920s and nearly got out of hand.

However, it’s worth mentioning that BMW themselves pretty much bought into the story as well. As it turned out, the idea of a propeller became so popular among the ranks of BMW enthusiasts that BMW themselves adopted the concept through various ad campaigns and marketing material.

In the end, although the prop idea started as misinformation that grew into a legend, the company accepted it.

With all of its fantastic history and appeal, the BMW emblem adds so much to a car. You can debadge so many cars and make them look better, but not BMW. With beemers, the emblem itself is a large part of the aesthetic appeal.

Most, if not all, of these cars, look naked without their roundel. The only thing worse than having your emblem stolen by someone is to have it fade or start flaking. Unfortunately, despite all efforts and quality control that these cars go through, the materials will begin to wear out over time.

Your roundel might start to flake after prolonged exposure to the environment. Nothing can degrade the aesthetics of a BMW faster than a flaked or faded roundel. The good thing is that replacing it is a simple and cheap fix. All you need is a new badge, a flat head screwdriver (although we recommend something that won’t jack up your paint), and a few minutes.

Are All BMW Badges the Same Size?

The short answer is a solid ‘no’. Despite being a ‘no-nonsense German brand’, BMW sure has its moments. For example, you’d think they would make all BMW emblems the same size. However, that’s not the case.

Not only are BMW badges different sizes on different models, but they’re also not all the same size on one vehicle. As a result, you have a situation where the trunk badge is smaller than the hood badge, but then the steering wheel badge and wheel badges are even smaller.

The chances are that no one knows why they’ve used four different sizes of BMW logos on every car. We’ll need to attribute it to one of those quirks.

The reason why we’re bringing this is up is to give you a fair warning if you set out to order new badges for your car. The safest bet is to look for badges for your specific BMW model. We’ll talk more about that after our short DIY guide.

How to Change the BMW Emblem on the Trunk or the Hood?

The replacement process is extremely simple. That being said, it’s easy to damage the paintwork on your car if you’re not careful. We recommend using a plastic trim removal tool for this job.

You can use a flat-head screwdriver, but for the love of everything you hold dear, put something on it. Wrap it up in electrical tape or duct tape. Anything will do so long as you’re not scratching the paint with the flat head tip.

BMW emblems have two pegs on the 9 o’clock and 3 o’clock positions. 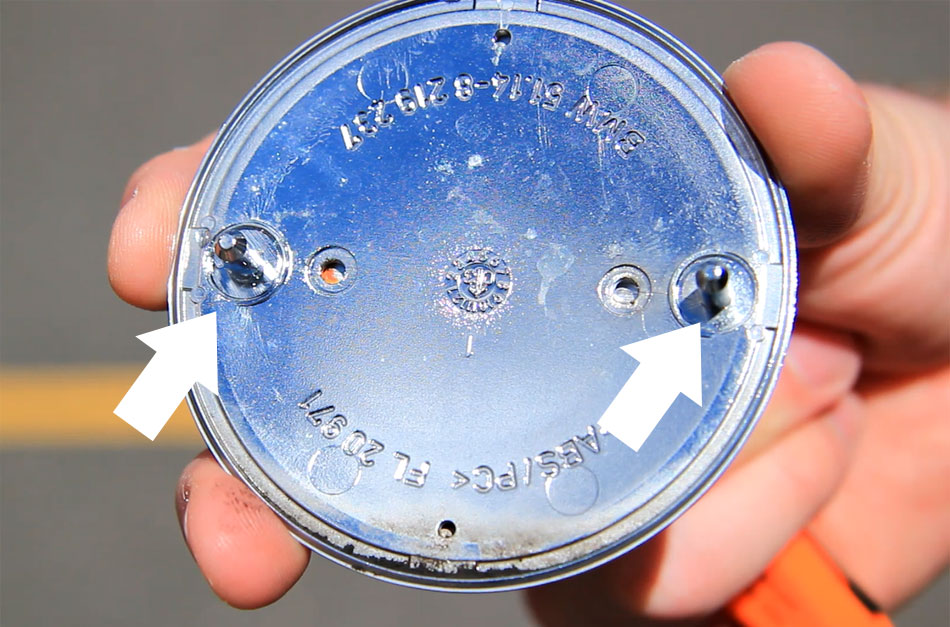 These fit directly into the two matching holes on a surface you’re working on. Both the trunk lid and the hood feature two holes with grommets in place. 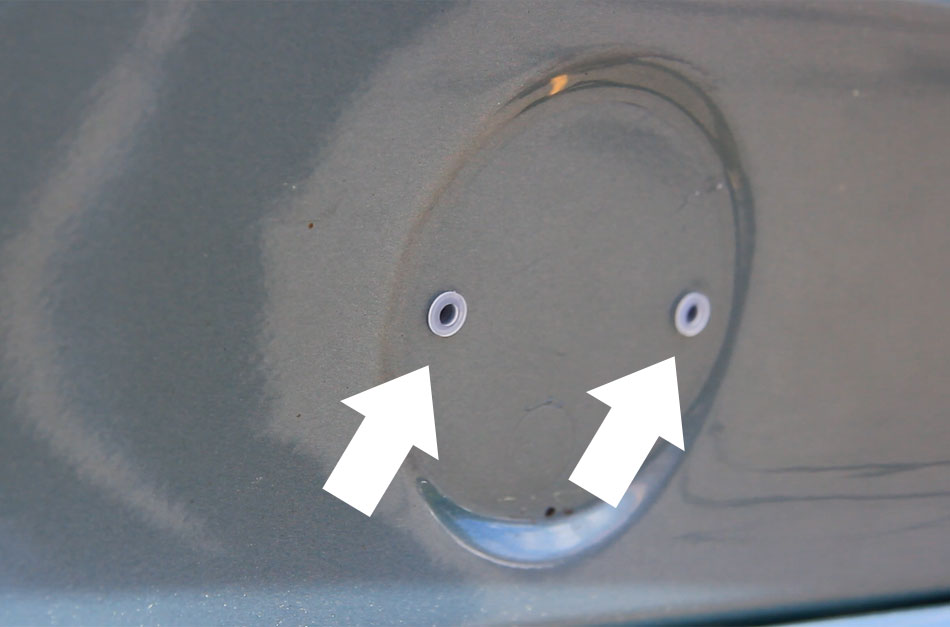 Again, keep in mind that hood badges and trunk badges are not the same sizes.

To remove the badge, simply take your tool and insert it underneath the emblem. 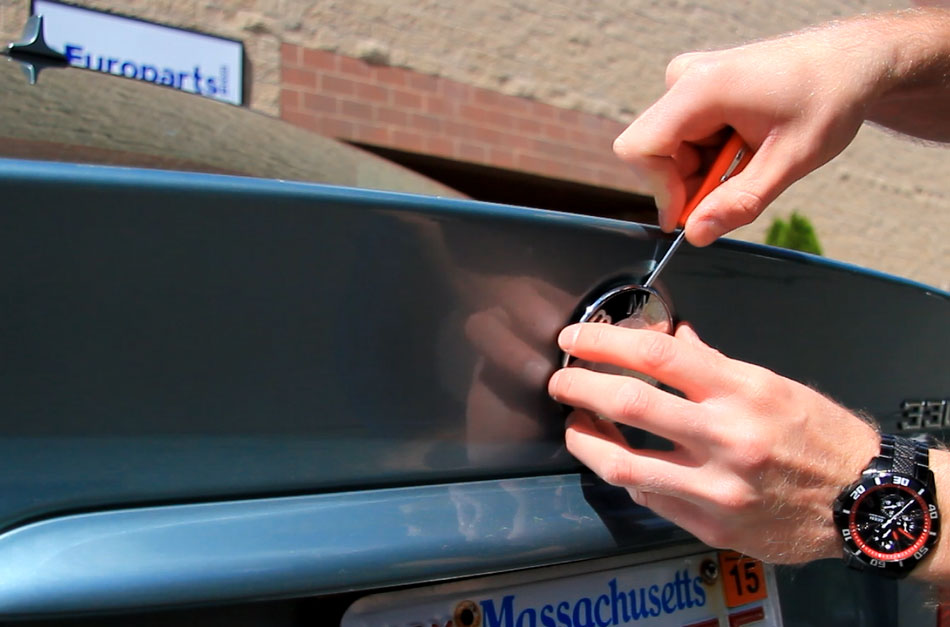 You’ll find that the roundel itself isn’t too stiff. Try not to apply too much pressure on the paintwork as you’re sliding the tool underneath the badge. Even if you’re using a plastic trim removal tool or the MacGuyver alternative, you could still do a number on the paintwork.

With the tool securely underneath the badge, start applying pressure around the center of the emblem. It should give way pretty quickly, popping both pegs from their place at the same time. 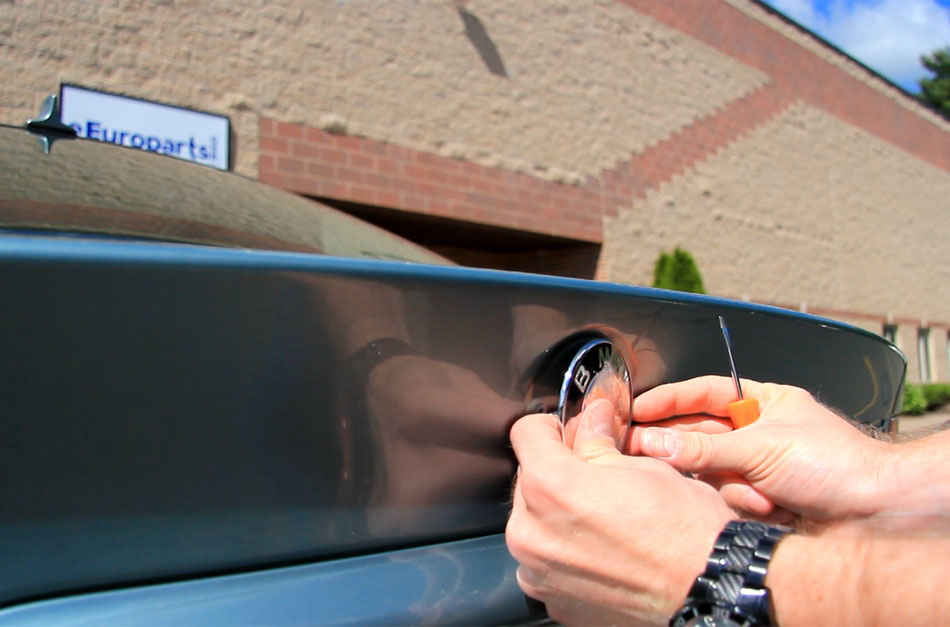 If, for whatever reason, it’s not giving way, try applying pressure near where the two pegs are located.

With the old one out, remove the old grommets and install a set of new ones. Once that’s done, simply take your new emblem and pop it into place. The new grommets are necessary because the old ones won’t provide a tight fit.

This simple DIY project shouldn’t take more than a few minutes of your time, but it will absolutely transform the appearance of your car.

Swapping the emblem on your car should be one of the easiest, if not the easiest, DIY project you can take on. However, Murphy never sleeps. There are a few issues that you could run into while refreshing the badges on your car.

The first and most annoying one is a broken peg that’s stuck inside the grommet. Fixing this issue comes down to trying to pick out the broken peg or push it through the hole. A much more severe problem would be breaking one of the two grommets that hold the badge in place.

Finding a replacement grommet might prove to be much more complicated than you’d think depending on what BMW model you drive.

Where to Find a Genuine BMW Emblem

Like most others who had to swap badges on their BMWs, we recommend that you only use genuine BMW roundels. You can find those and more on at our online store. Simply input your BMW’s year, make, and model, and our system will show you the list of items that fit your car. These will include both the emblems themselves and the replacement grommets.