The BMW X5 was one of the more prolific vehicles to come out of BMW in the last few decades, proving to the world that the small/truck SUV thing was going mainstream in the European luxury sector.  Previously dominated by Range Rover, and with waters tested by the Mercedes ML a few years previously, the E53 BMW X5 offered a comfortable interior, all wheel drive, and a high ground clearance.  A lot of these new SUV’s made it to America (about 252,000), and because they are getting on in years we are finding some issues that seem to be common in the BMW X5, specifically with the transmission.  Some questionable designs were implemented, leaving weak points in mission critical areas. These issues can lead to your BMW X5 hard shifting, banging, and having problems with limp mode and the transmission holding gears. 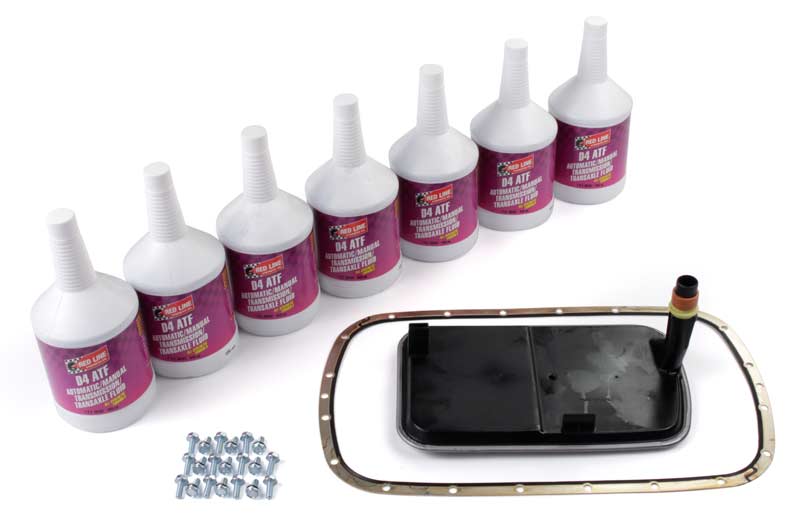 These complicated transmissions require maintenance, regardless of what BMW says (think it’s a coincidence that these cars are having problems after BMW’s recommended “lifetime oil fill”?)  Remember, a free maintenance plan is much cheaper for the dealer if they decide to delete a few items off the list.  One of these items is the transmission fluid, which many of the BMW gear heads are recommending closer to a 30,000 mile interval.  You should replace the filter at the same time while you’re in there.  We have oil change kits for both the 3.0 engines (A5S360R/A5S390R (GM 5L40-E) transmission, and both 4.4 and 4.6l V8 with the A5S440Z transmission.  Remember when changing any transmission fluid, remove the FILL plug first.  If for some reason it won’t budge, you don’t want it to be when you just finished emptying out your trans!

The X5 auto trans generates a lot of heat, especially if you are towing.  The cooling system for the V8 X5 utilizes an oil-to-water style transmission oil cooler hooked onto a bracket, which is then connected onto the radiator.  The bracket is strange, almost like a cooling system circuit board, which replaces a few hoses that would connect the oil cooler with the control valve/thermostat.  The bracket itself isn’t prone to failure, but the thermostat is, and should be considered a prime culprit if you have a BMW X5 hard shifting problem.  The oil cooler and lines also tend to develop leaks, and can collect constricting blockages if the transmission hasn’t been serviced.

The control valve or thermostat is responsible for routing coolant out of the main cooling system and into the oil cooler.  Made of plastic, it is a common failure point that will keep coolant from circulating into the oil cooler when it goes bad.  Of course, the subsequent effect is an overheating transmission that will have trouble shifting smoothly, or at all.  A lot of people have had this problem pop up on the highway, where the drivetrain is under more continuous load than in the neighborhood.  The E53 X5 isn’t the most aerodynamic vehicle, afterall. 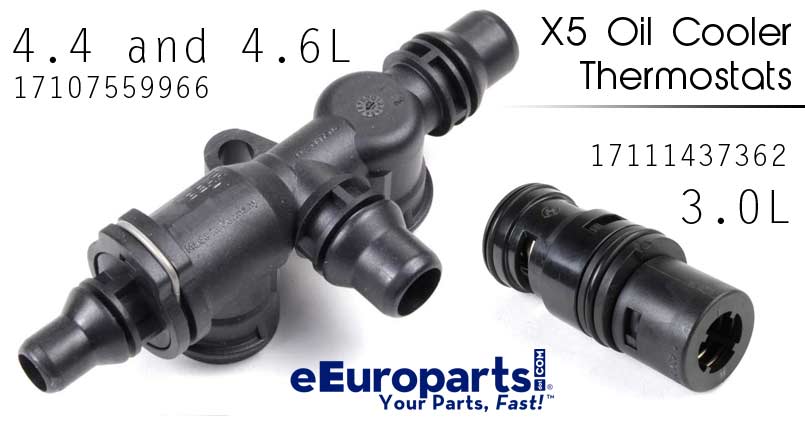 There are two valves/thermostats, and which one you need is dependent on the engine you have.  The 3.0’s have a thermostat 17111437362 that lives between the oil cooler mounting bracket and the expansion tank.  The 4.4 and 4.8l V8’s have a more complicated style valve that still plugs into the mounting bracket (which looks quite a bit different between 6 and 8cyl engines).  That valve number is 17107559966 and is supplied to BMW by Behr. 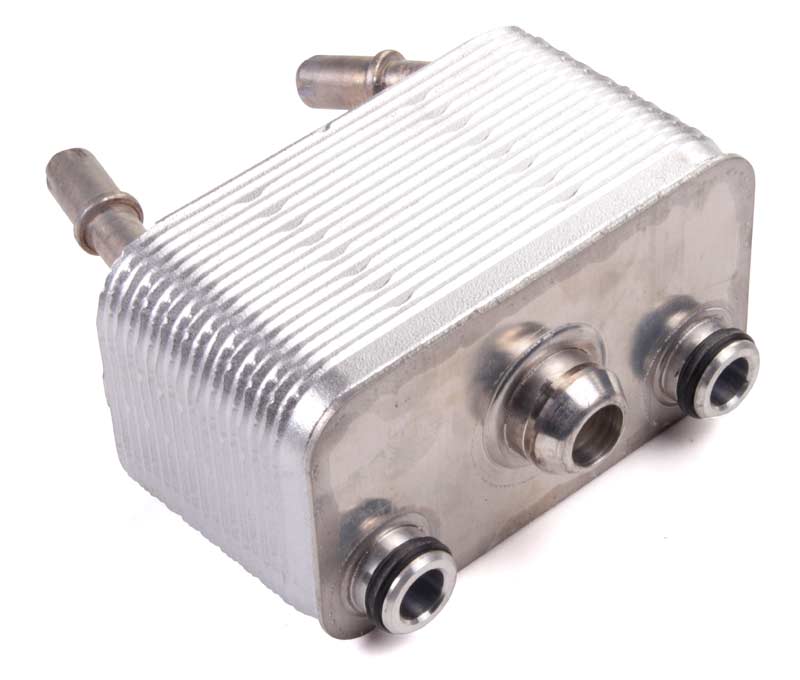 The Behr transmission oil cooler is the same part that you would get at a BMW dealer for a substantial savings.

After 15 years (and probable questionable transmission maintenance habits by previous owners), the oil cooler can accumulate a lot of crud and gunk that can affect efficiency, and will likely start leaking.  The job isn’t too bad, all you need to do is pop it out of the mounting bracket and remove the oil lines from the transmission (I made that sound easy right?).  The oil lines feature quick connects and it is recommended to use the special tool 3466 to remove them.  The oil cooler for the early V8’s and all 6cyls is 17207500754 and the later V8 engines (04-06) is 17227537601.

On early V8 4.4 and 4.6l V8 models (2000-2003), erratic shifting and incorrect temperature readings can be the result of a wiring harness 24341423719 that controls the valve body on the transmission.  The valve body is a series of hydraulic valves that divert fluid around the transmission to actuate gears, and those valves are actuated by electronic solenoids.  Because of the location of this harness (underneath the transmission oil pan) it is exposed to a lifetime of serious heat and chemicals.  Eventually you will encounter jerky and unpredictable shifting, and the transmission holding gears.  The harness contains a vital temperature sensor as well that relays important information back to the transmission ECU.  If the readings are off, the actions of the ECU will take into account faulty temperatures, something a transmission is very sensitive to.

For some reason, the bushings that attach the rear subframe to the unibody of the car is a particular trouble area.  Perhaps due to the immense amount of load, and maybe a substandard OE design, these bushings will crush and disintegrate causing banging when applying throttle or brake.  This is because the rear sub frame mounts all the suspension and drive train to the rear of the car.  When applying torque with bad bushings, the entire undercarriage has freedom to flex and bang around.

The rear subframe take a lot of abuse, using lifetime warranty Powerflex bushings can be a great way to increase the life of your BMW X5

We recently added updated Powerflex brand bushings PFR5908X4 that carries a lifetime warranty, and can be installed in two halves without requiring a press.  It is a common DIY to cut (sawzall) or burn out what’s left of the stock bushings, and install the Powerflex versions while still on the car.  This will tighten up shifting and ease sloshing and banging, even if your transmission is in good shape.

So, I hope that helps you track down X5 hard shifting problems and find a solution that gets you back on the road.  Keep in mind that when your transmission is overheating, it can cause a lot of error codes that might not actually be the problem.  Take a look at the relatively inexpensive solutions mentioned in this post before replacing larger, more expensive components.  If you are interested in what else you may come across in your period of X5 ownership, check out the blog post here, laying out some other common issues that plague the E53 models.