Engine mounts are one of those car parts that are extremely simple but play a significant role in the way the car works. It’s a big deal when they fail, and if you had that happen to you, you know exactly why. Today we’ll walk you through the BMW E36 engine mount replacement process.

This particular car is the 325i with the M50 engine, although the process is similar for the four-bangers and other engines available for this car. We’ll discuss the parts you’ll need, tools, the difference between various types of mounts you can get, and more! Let’s get to it.

How to Tell When an Engine Mount is Close to Failure on E36 BMW?

Engine mounts wear out over time. If you have a high mileage car, like most E36 BMWs are at this point, it’s not a matter of if an engine mount will fail, but when. There are several common ways you can spot a failing or failed engine mounts; the symptoms are fairly straightforward.

Let’s start with the most obvious one. A severely damaged mount will allow the engine to move around the engine bay when you press the accelerator or when you brake. You can observe this while the car is parked, as well. This is also the easiest thing to diagnose. Simply have someone sit in the driver’s seat and have them apply some gas.

If you notice excessive engine movement, that’s a tell-tale sign that your mounts are toast. However, there’s a little catch with this method. Some engine movement is absolutely normal, so don’t freak out if you see the engine’s slight movement. 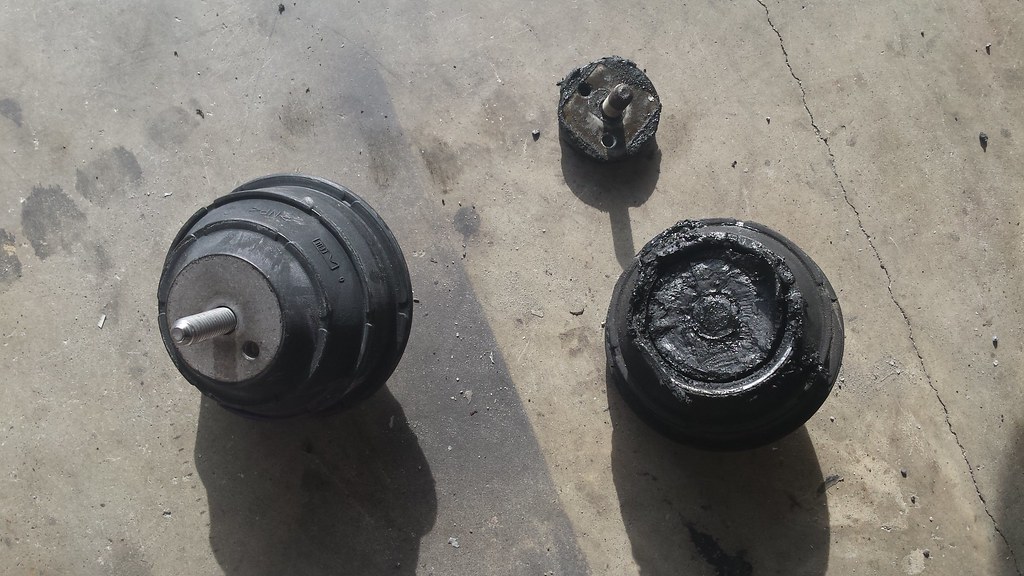 Next comes the noise. You might hear a subtle or not so subtle clunking noise when braking or accelerating or going over bumps. The thing to remember with this symptom is that it could be a lot of other things as well, including transmission mounts. Even a broken muffler mount could produce similar symptoms.

What Kind of Engine Mounts Should You Get for your E36?

BMW E36, just like E46, is a familiar platform by now. We know just about everything there is to know about this car at this point. That being said, there are several types of mounts you can choose to get for your car.

Now that we’ve explained what engine mounts do and what options you have for the E36 let’s get to actually swapping them out. Here’s a list of tools you’ll need to get this job done.

As far as parts go, you’ll need a set of engine mounts. We went with Febi’s E36 M3 set, which perfectly matches our 325i we’ve used as a guinea pig for this guide. Alternatively, you can use the OEM Lemfoerder set that is also found in our offer.

With the tools and parts at our side, we’re ready to get started. First thing first, the car needs to go up on jack stands.

Once the car is securely in the air, it’s time to find and remove top engine mount bolts. Start with the driver’s side mount. To get to it, you’ll need to remove the airbox. First, find the electrical connector from the cruise control component, unscrew it and use a 10mm socket to loosen the nuts that hold the airbox in place.

Once you’ve done that, simply disconnect the air intake by removing the two metal clips that hold the hose in place. Flip the airbox and place it on top of the engine. Doing so speeds up the process since you don’t have to remove the vacuum lines.

Depending on how bad your mounts are, you might need to apply some penetrating oil to loosen the nuts. 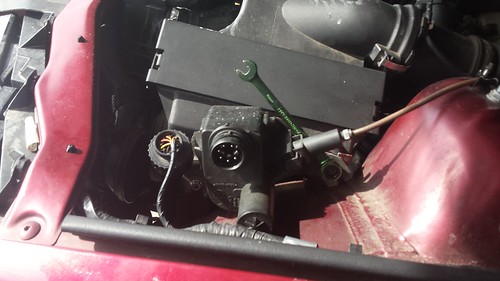 With the airbox removed, put together your extended socket and reach down by the coolant hoses to the top nut. Do the same on the passenger side. This part of the job should be straight forward although you might need to move those coolant hoses out of the way on the driver’s side. 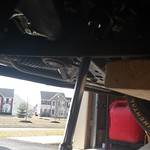 Now it’s time to get under the car. Locate and remove the bottom nuts that hold the mounts in place. There’s no need to worry as the engine will still be resting on the mounts even with the nuts off. 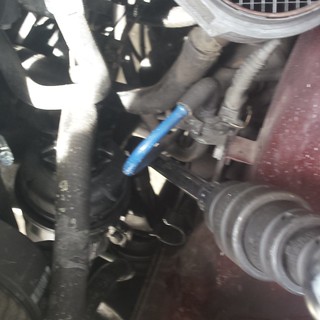 Now that the engine mounts are free, take your floor jack, place it underneath the engine (usually the oil pan), place a wooden plank or piece of 2×4 to distribute the load and prevent any damage to the oil pan, and carefully lift the engine.

If you have access to the motor crane, do yourself a favor and use that instead. However, since most DIY enthusiasts don’t have one of those, we’ve chosen to use the much more common floor jack.

Step 6 – Wiggle the Old Mounts Out of Place

Once the engine is lifted, remove the old mounts. Keep in mind that you want to lift the engine just enough for the mounts to come off. Don’t go too far as you might start putting all kinds of hoses and lines under tensions.

To install new mounts, pay extra attention to the positioning divot located on the bottom of the mount, next to the stud. BMW has left a small hole in the sub-frame designed for that divot to sit in. Make sure that you set it properly.

Once you’ve done so on both sides, loosely thread the nut on the bottom bolt and lower the engine. Once it’s sitting on the mounts, torque both the upper and lower nuts to 45 Nm or 33 ft-lb of torque.

Quick tip. As you start lowering the engine, you might find it misaligned with the mounts. This is why some people choose to remove engine mounts one by one. Expect to wrestle the engine a little to get it into place. It’s no big deal, but it does happen from time to time.

Now all you have to do is reinstall the airbox making sure that the vacuum lines haven’t been disturbed. Once the air box is in place, reinstall the cruise control component, and you should be all set.

If you’re looking for OEM or aftermarket engine mounts for your BMW E36, you’re in the right place! Simply head over to our online store, input your car’s details, and our system will show you all the mounts we have available for your specific vehicle.

In case you have any further questions about engine mount compatibility, feel free to get in touch with us. Our customer support is standing by to answer any and all questions you might have!