What is a frankencar? While there is no single definition everyone agrees on, most will tell you that it’s a car you put together using parts from other vehicles. That being said, over time, the term “frankencar” gained a negative connotation.

We want to change that. Here at eEuroparts.com, we’ve made a number of such cars over the years. The one we’ll discuss in this series is the latest one to join the ranks. This is part 1 of a multi-piece series where we’ll transform a MkIV VW Jetta into a fierce driver’s machine.

Every car project needs to have a clear mission — a defined goal you’re trying to accomplish. We wanted to push the MkIV chassis to its limits in terms of performance. The car we’re working with is a Jetta based on this popular platform. If you know your Volkswagens, you know that a Jetta isn’t the most tuning-friendly MkIV out there. Despite that, we’ve decided to give it a shot, because why not?

We’ve begun turning the Jetta into a proper track day car by first making sure that it can stop on a dime. Brakes should be the first performance mod on any vehicle for obvious reasons. We were pretty lucky in this regard.

The MkIV platform is a diverse one. So many cars within the Volkswagen group have been based on it. VW Golf and Jetta are probably the most popular ones of the bunch.

As you know, MkIV Golf came in various flavors, one of them being the R32. Considering how much power was packed under the hood of that car, it was only logical for VW to fit this model with beefy brake rotors and upgraded calipers.

As it turns out, most of the MkIV platform cars feature interchangeable parts. Although nothing new in the automotive industry, car manufacturers don’t often make the performance version of a model fully compatible with their more basic trims. Fortunately for us, VW did precisely that.

Upgrading our Jetta brakes was a simple matter of finding a suitable R32 donor car and robbing of its brakes. A suitable R32 was found, and its brakes were ours. The simple bolt-on job made it extremely easy to do the upgrade. 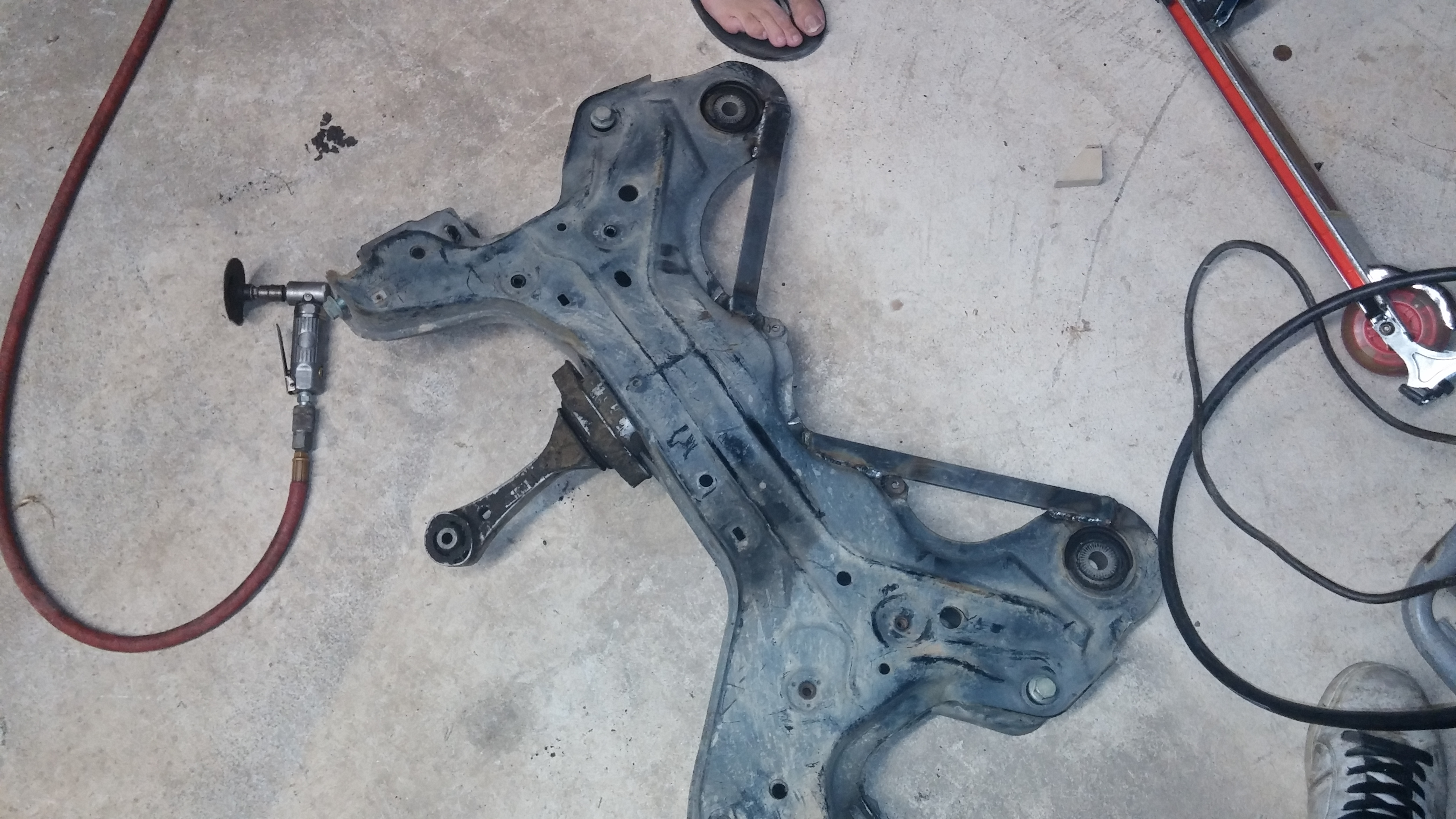 Once we were sure our frankencar was able to come slow down fast, it was time to make sure it could go around the corners fast. But no, we didn’t jump on a cool set of coil overs just yet. You’ll need to wait for the next part for that. First, we had to make sure that our platform was solid. 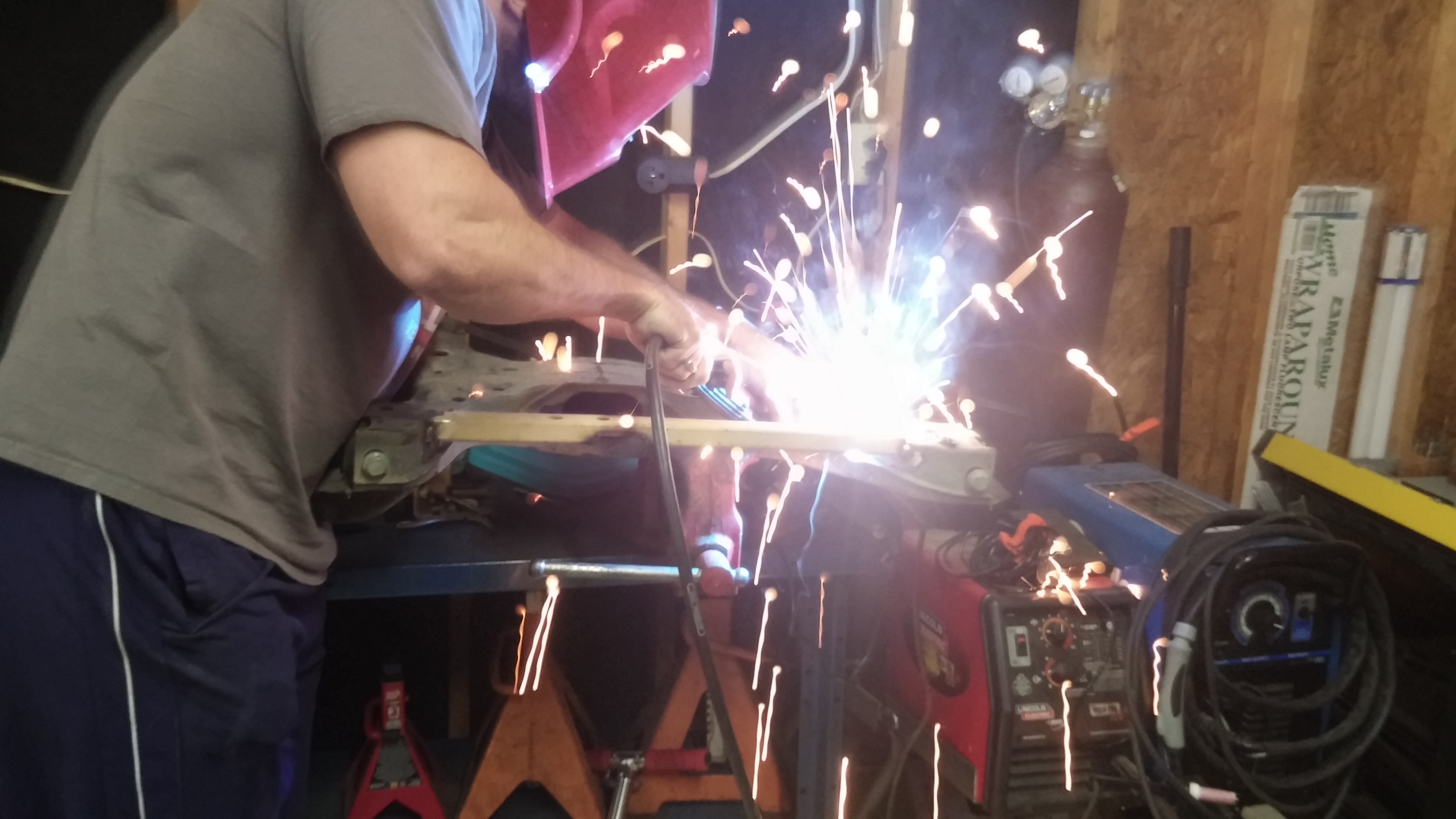 VW’s Fail and our Win

No car manufacturer is perfect. Contrary to what some think, VW isn’t perfect either. Although the MkIV was a solid, classic platform overall, it came with a few quirks of its own. One of these quirks was the subframe.

While designing the MkIV platform, VW engineers seem to have got lost in schnapps and bratwurst right when it was time to figure out the subframe. Their first mistake was using pressed steel.

For the most part, the steel itself was alright, but the way it was pressed to make the subframe had left so much to be desired. This entire piece was weak, even when brand new. Now imagine what a few decades of exploitation added to that picture?

The subframe was so bad that VW had redesigned it entirely with the new MkV platform. They ditched the whole steel stamping process and used a solid piece of aluminum in the new generation of subframes.

That being said, we had to make do with ours, which was in a pretty decent condition, all things considered. The MkV subframe was much stiffer than the one we had on our frankencar. We couldn’t use the MkV subframe, but we wanted the same characteristics it brought to the table. A compromise came in the form of a DIY reinforcement job. 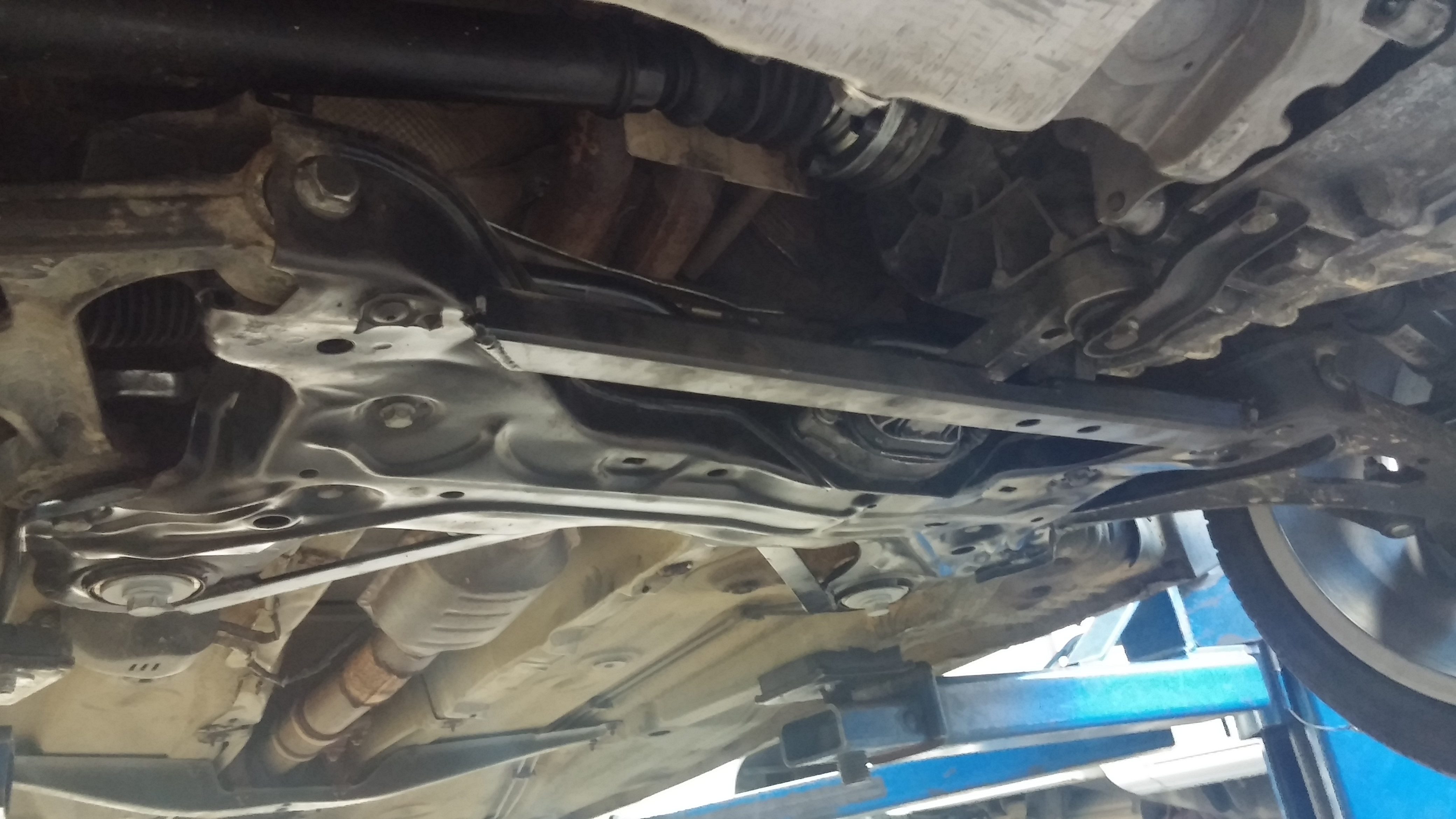 To make any of our intended modifications, we first had to drop the subframe. On many cars, this job is a real pain in the rear. However, our rears remained intact thanks to the overall design of the classic MkIV chassis. Dropping the subframe came down to removing a few bolts. It’s a job you can do in the privacy of your own driveway should you need to.

With the subframe off of the car, we could start working on an outline of all the modifications we were going to make. Since a new, reinforced subframe wasn’t available, we had to bust out the welding machine.

Reinforcing the subframe on any classic MkIV is a reasonably straightforward job if you know how to use a welding machine. For this project, we’ve used some leftover box metal we had lying around and a set of PU bushings.

If you look at the front of the subframe, you’ll notice that the two wings that join the subframe with the suspension are sticking out without any support. To fix that, we’ve used a piece of straight box steel and cut it to a length that fits between the two front wings.

By doing so, we’ve essentially braced the front of the subframe, giving it a lot more rigidity. Additionally, we’ve put a solid link between the independent suspension components on each side of the vehicle, thus reducing the degree of twist once we started throwing the car into corners.

Our next goal was to reinforce the rear of the subframe by welding two smaller pieces of box metal to each of the rear wings. Instead of manufacturing another brace, we’ve triangulated each wing by adding a support beam running from the center of the subframe to the top of each wing.

The result of our welding mods was a much more rigid piece that was now much more durable and far less prone to flexing. However, there was still one more thing we had to do — install new bushings.

Rubber bushings are great. In fact, they are still the top-recommended choice for most cars. However, once you get into track day project cars, you’ll want to remove any movement in your suspension. Doing so means replacing the rubber bushings with a set of polyurethane ones.

These aftermarket parts are not that complicated to find, nor are they too expensive. Changing the bushings with a new set of PU bushings is a fairly easy mod you can also perform in the privacy of your driveway. However, you might need specialized tools depending on how badly your original bushings refuse to cooperate.

By reinforcing the subframe and eliminating any play between the suspension and the unibody of the car, we’ve built a solid platform for future upgrades. Speaking of which, next in line are individual suspension parts. We’re talking control arms, swaybars, and more.

However, you’ll need to stick around for Part 2 of this saga for that story. There’s plenty more content to come with the frankencar. The parts are there, the weather is favoring us, and we’re full of ideas. It doesn’t get much better than that.