Mercedes-Benz Camshaft Adjuster Magnets - How do they work?
↓ Skip to Main Content

Mercedes Benz Camshaft Adjuster Magnets – Everything You Need to Know

Variable valve timing has made a massive impact on the way we drive cars today. Being able to optimize the engine performance on the fly was recognized as a key feature for modern automotive design. Mercedes-Benz introduced the Camtronic as their answer to what other industry leaders were doing at the time.

Even though it’s one of the simpler systems out there, Camtronic has a few components that could occasionally give Mercedes owners some trouble. Camshaft adjuster magnets or solenoids are one such component. Today we’ll discuss what camshaft adjusters are, how they work and help you recognize the symptoms of a failing adjuster.

Mercedes-Benz has been behind some of the most ingenious automotive technologies we use today. Technologies such as the ESP come to mind. Needless to say, when variable valve timing became a thing, it didn’t take long for Mercedes to join the party. The system Mercedes came up with was called Camtronic.

Unlike most other systems out there, Camtronic wasn’t necessarily developed to improve power. Instead, it was designed to improve fuel economy. At its core, the Camtronic variable valve timing system is relatively simple.

Camtronic intake camshafts, similar to Honda’s VTEC or BMW’s Valvetronic, feature different cam profiles. The camshaft itself is fitted with a variable cam phasing actuator at its end that allows it to move back and forth, and the Camtronic VVT electric actuator that sits above, in the head of the engine. The entire cam slides back and forth, selecting the appropriate cam profile.

We’ll leave a more detailed explanation of the Camtronic system for another time. What we want to focus on today is the camshaft adjuster magnet.

Camshaft adjuster magnet is nothing more than a simple solenoid at its core. However, despite being a relatively straight forward component, adjusters perform an important task within the Camtronic system. Much like other systems of this type, Camtronic greatly relies on oil and oil pressure to achieve variable valve timing. The camshaft adjuster solenoid’s primary purpose is to allow more oil to enter the system, ensuring proper lubrication under a more massive load.

How Does a Camshaft Adjuster Magnet Work?

To fully understand how these magnet’s work, let’s take a look at the illustration below. You’ll notice that the magnet (Y49/4) is sitting on top of the pulse wheel (1). As it activates, it pushes a metal rod into a perforated hydraulic ‘control plunger’ (2/2 and 2/3). A closer look at the plunger shows that it has raised sealed ridges and grooves that pressurized with oil.

Once the plunger is put in the active position, the perforated tubes start pushing the oil up and out a particular series of holes in the cover valve (2/5). This oil then travels through an oil gallery, finally reaching the cam adjuster. Once it reaches the cam adjuster, the oil pressure pushes it into position B, thus advancing the timing.

When the magnet is deactivated, the plunger is no longer forced into the control valve and is pushed back into position by the spring (2/4). The series of holes getting oil pressure changes, and the adjuster switches the position of the cam gear (3) relative to the camshaft (4) for position A. 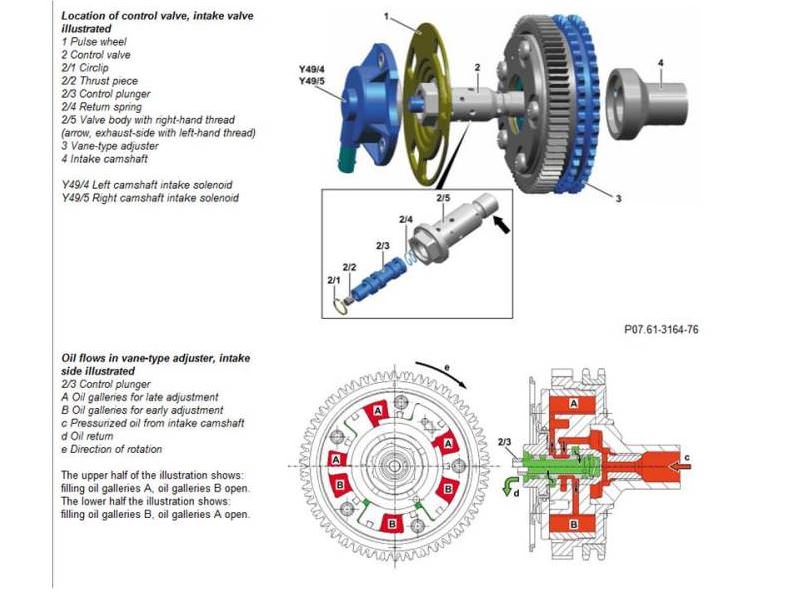 With the release of the M271 engine, Mercedes has also released an updated camshaft adjuster magnet design. The easiest way to tell the difference between the original magnet and the upgraded one is by looking at the mounting plate. The original ones have a circular mounting plate, while the updated version has more of a triangular plate.

Adjuster magnets on all of these engines are rather easy to find as they are located on the front of the engine, up high next to the plastic engine cover. This makes them very easy to access should you need to.

Next up are the camshaft adjusters found on the M272 V6 engine. Overall, these are relatively similar to the adjusters we’ve just talked about. Since M272 is a V6 engine, there’s going to be two adjusters on each bank. Even though they are located near the front of the engine, the adjusters on M272 are not as easy to reach.

Why do Camshaft Adjuster Magnets Fail?

The fact that these solenoids are simple doesn’t mean that they can’t fail. One of the main reasons for camshaft adjustment magnet failure is oil getting into places where it shouldn’t be. Reminiscent of 722.6 automatic transmission valve body electronics, the oil tends to penetrate the wiring and run deep into the harness.

Another thing worth mentioning is the issue with early magnets shipped with the M272 engine. These had a built-in flaw that caused them to fail prematurely. As a result, Mercedes issued an update, and the new parts were much better. However, you can still run into problems depending on the age of the system and mileage. 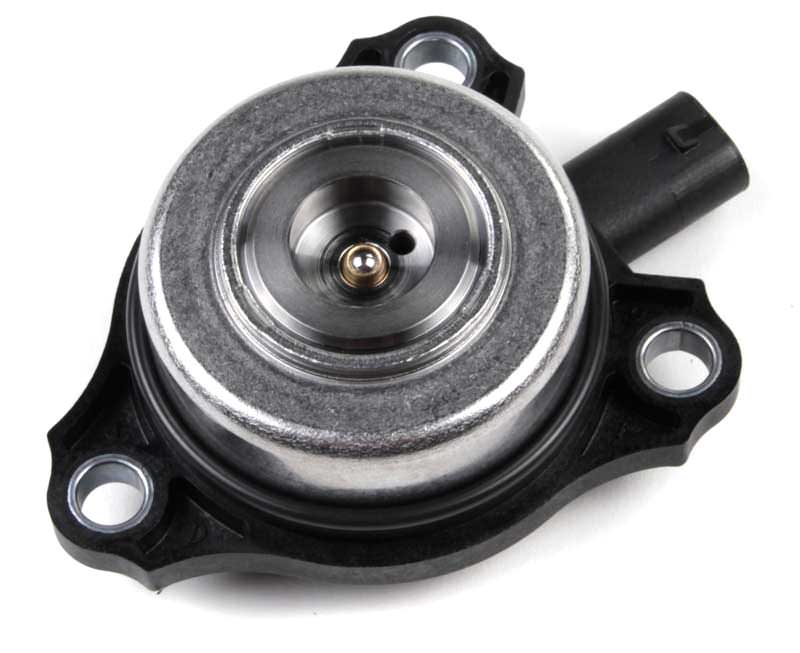 Recognizing the Symptoms of a Failing Camshaft Adjuster Magnet

A failing camshaft adjuster magnet will often give you several warning signs before it goes completely. The first sign that something’s not right is most likely going to be the check engine light. As always, when the notorious check engine light starts flashing on the dash, you should investigate.

More often than not, you’ll be getting camshaft position errors such as the P0015 (Camshaft Position B- Timing Over-Retarded (Bank 1)) on vehicles running the M272 engine. Although this doesn’t necessarily have to mean that your cam adjuster magnets are faulty, you’ll at least know which bank of the engine you need to look at. If you’re getting “Camshaft Position Correlation” errors such as the P0017, the chances are that you’re dealing with a bad camshaft position sensor rather than the camshaft adjuster magnet. Similar goes for the rest of the engines fitted with the Camtronic system.

Another visible sign that you have an issue related to the VVT actuation is a rough idle followed by unusually high fuel consumption. The rough idle is often attributed to the lack of oil within the system, which affects how the camshafts operate.

Naturally, since Camtronic’s main job is to improve fuel efficiency, a failing or failed adjuster magnet will prevent it from doing its job. Impaired VVT system will cause increased fuel consumption and lowered engine efficiency in all cars, not just Mercedes.

The good news is that you can diagnose a failing camshaft adjuster magnet fairly easily. Being mounted at the very front of the engine makes these parts very easy to reach. Of course, vehicles that use the M272 engine might be an exception to this rule, but it’s still very much doable.

What you’ll want to do is apply 12v of electrical current to the contacts of each magnet and listen to what happens inside. If the magnet is good, it will click. If one of the magnets clicks and one doesn’t, you’ll know that you have a bad magnet. The replacement process is quite simple and requires basic tools.

Order your camshaft adjustment magnet from our store and save money! Getting this job done at a dealership can be a costly repair, even if you provide your own replacement parts.