Torque Converter 101 – Basics of Operation, How to Diagnose and Fix Issues

Automotive transmissions are complicated on a good day. Modern gearboxes, especially automatic ones, look like alien technology compared to the good old manual transmissions of the past. That being said, the torque converter is arguably the most interesting part of modern drivetrains.

It’s a fairly simple device that solves a complex problem using an ingenious solution. After we break this piece of tech down and show you how it works, we’ll also talk about diagnosing issues on one. Let’s get started.

What Is a Torque Converter?

A torque converter is a device that sits between the transmission and the engine. You’ll find one of these bad boys in all cars that run standard automatic gearboxes. An average torque converter consists of three main parts:

As you probably know, automatic gearboxes have no clutches as manual cars do. There’s no clutch pedal to press. The fact that you don’t have to change gears manually has made driving easy, but it has introduced several problems to engineers.

Instead of building some kind of overly complex system of clutches and hydraulic actuators, engineers figured out how to use fluid dynamics to solve this problem. In fact, the solution is so simple that the device they’ve invented, the torque converter, usually has three main parts.

How does a Torque Converter Work?

Your average torque converter looks like a ring torus that was cut in half. One half of the torus houses the pump, the other houses the turbine. Each of these parts looks like a jet engine turbine, complete with a bunch of turbine blades spiraling in one direction.

The part that sits between the turbine and the pump, is called a stator. It’s approximately ⅓ the diameter of the torus, and it also features what looks like turbine blades.

Here’s the important part — the space between all three parts is full of transmission fluid. The pump side of the device is affixed to the flywheel via the pump cover and matches the engine RPM. On the other side, you’ve got the turbine, which is fixed to the output shaft that leads to the transmission.

The idea behind this device is fairly straightforward. When you step on the gas, the engine spins the flywheel, which in turn spins the torque converter pump. Those blades in the pump begin to move the transmission fluid, causing it to circulate within the enclosed system. As the fluid moves through the blades of the turbine, the turbine starts to spin.

The faster you spin the pump, the more centrifugal force it creates, and the faster the fluid moves through the turbine.

Torque Multiplication Through the Use of a Stator

Although the system we’ve previously described works, it’s not overly efficient. The speed of the pump and the turbine’s speed are never the same since there’s always some loss of energy between the two. More importantly, the pump has to work overtime to spool up the turbine when the vehicle is accelerating from a stop.

Stators solve this issue by acting as a torque multiplier within this enclosed system. As the pump sends fluid to the turbine, the fluid pushes through the blades of the turbine and is directed back towards the pump at a nearly right angle. All the stator does is change the direction of this returning fluid, directing it towards the pump’s blades at a sharp angle.

By doing so, the pump has to do less work, allowing it to spool the turbine much quicker. In fact, the stator alone usually adds a 2 to 2.5 multiplier to the torque output of the pump.

Even with the torque converter present, when the vehicle is moving and the engine works within the optimal power band, you’ll still experience some energy loss between the pump and the turbine.

More recent torque converter designs feature a locking clutch that essentially locks the two parts of a torque converter together once the vehicle is moving at speed. That way, you’re getting a 1:1 transfer of power from the engine to the transmission.

Those seals tend to go bad over time. Once that happens, they will spring a leak, causing a permanent loss of fluid within the system, loss of pressure, and potential fluid contamination. Here are a few of the most common symptoms of a failing torque converter.

When the transmission fluid pressure drops to a critical level, your torque converter will begin to slip and shudder when you come to a halt or accelerate. Since there’s either not enough fluid in there or the fluid is contaminated, the converter can no longer do its job correctly.

That being said, it’s not always easy to diagnose whether the torque converter causes the slipping and shuddering. Similar symptoms are caused by failing valve bodies. The only real way to tell is to examine the fluid level and the condition of the fluid inside.

Although fairly rare, you might end up with a broken fin either on the pump or the turbine side of the converter. If that happens, you’ll most likely notice a metallic sound coming from underneath your feet. That’s the broken fin bouncing around the torque converter as the fluid keeps moving. 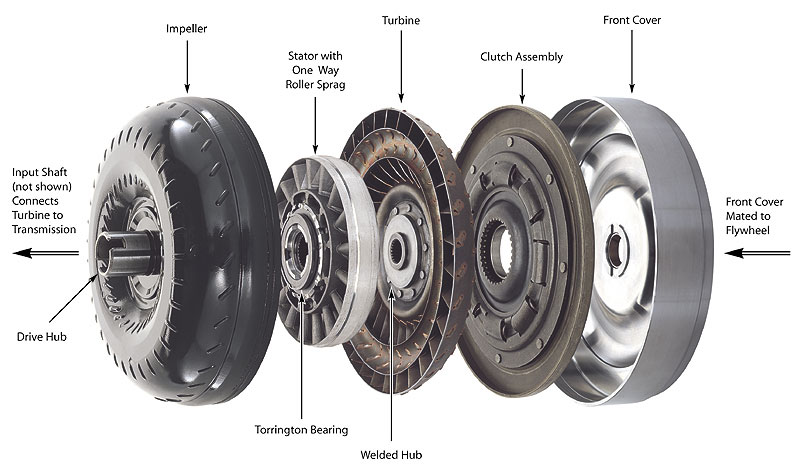 How to Fix a Torque Converter?

Their inherent simplicity of the design means that torque converters rarely fail. When they do, there are only so many things that can go wrong. Most of the issues we’ve mentioned above can be solved by finding where the transmission fluid is leaking and replacing the seal that has failed.

If you end up with a broken fin, you’ll need to either get a whole new unit, which is recommended or find a replacement for the broken part.

Only Use Quality Replacement Parts

A torque converter is an essential part of your drivetrain. If you have to replace yours, do yourself a favor and only use high-quality replacement parts. We offer a wide range of torque converters for many European car makes and models.

To find one that matches your vehicle, simply head over to our online store and input your car’s details into our system. Once your inquiry is processed, our website’s system will present you with a list of parts that fit your vehicle.