Story of that Precedes the 9-3: The First SAAB Convertible
↓ Skip to Main Content

Story that Precedes the 9-3 Everyone’s Used To: The First SAAB Convertible

It’s been almost 12 years since SAAB fell victim to GM’s kiss of death. What was once a pillar of Swedish automotive prowess and engineering, is now a defunct brand. All of that heartache makes the fond memories of the early cars SAAB created that much sweeter. Speaking of sweet SAABs, everyone loves a SAAB convertible.

It’s an iconic design that has withstood the test of time. However, there’s an interesting bit of history regarding these convertibles that not many SAAB fans are privy to. Join us on a journey back through the generations of convertibles designed by one of Sweden’s most popular brands.

Long before GM ever meddled with the fate of SAAB, another American had his say in terms of steering the brand in a new direction. The main difference is that this American brought didn’t steer the brand into a wall. Rather, he helped create one of the hottest SAABs ever made. His contribution to the history of the SAAB lineage still turns people’s heads in 2020.
That man’s name? Robert J. Sinclair, or Uncle Bob as he later became known in the car enthusiast community. 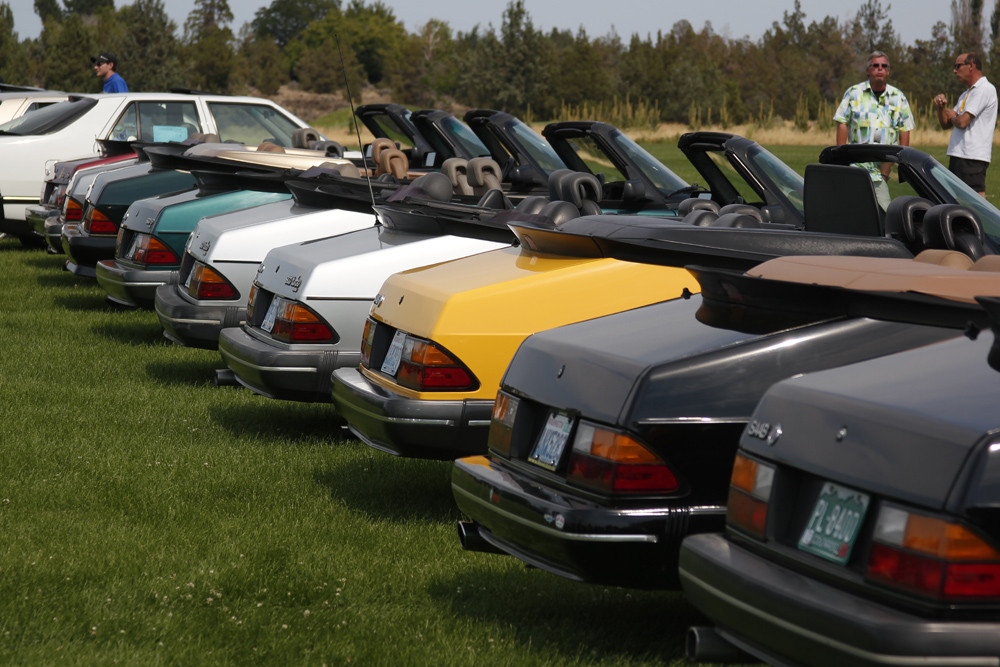 Uncle Bob and the Birth of SAAB Convertible

Bob was a sales guy who joined the company back in the late ‘50s. He went around the block for a few years, working with other European brands, including Volvo. However, Bob always came back to SAAB. Looking back at his career, it really could be used as a blueprint for the ultimate American dream story. Sinclair worked his way up from the salesman position only to become the president of the American division almost 20 years after he rejoined the company.

Being a sales guy, Sinclair had managed to bring the sales stats up and put his company back on the automotive map. In fact, he boosted sales by 42% in 1983, which was a record at the time. Needless to say, Bob had some pull with the brass. 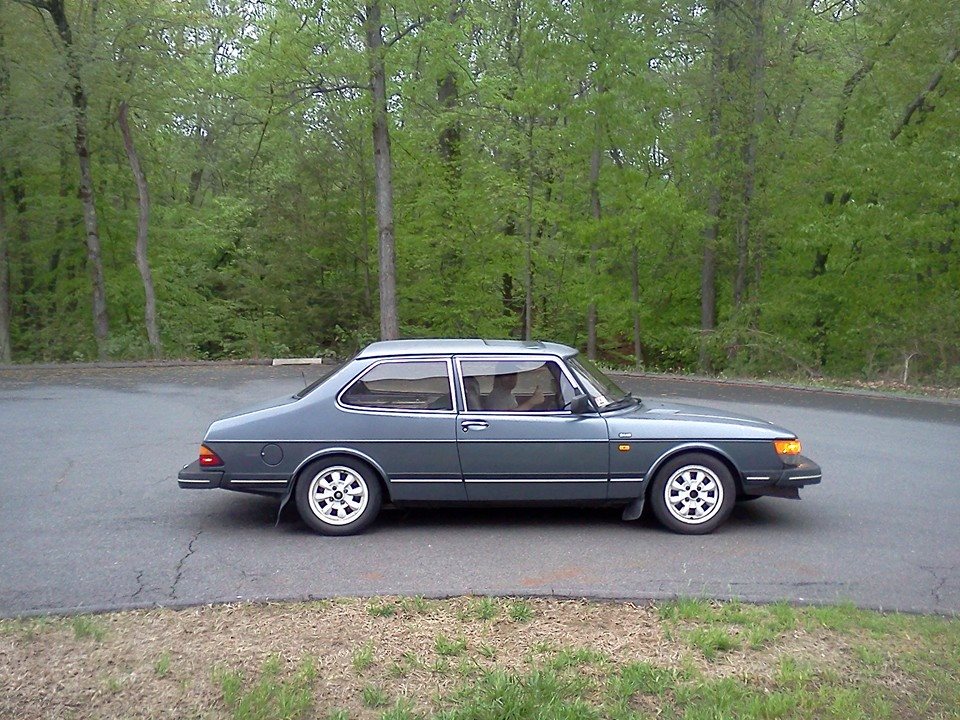 The ‘80s were an exciting time for the automotive industry. Safety became a real concern or at least a much deeper concern on just about every manufacturer’s list of priorities. One thing that didn’t scream “safe” back in those days was a convertible.
So much so that most brands were simply moving away from the idea altogether. Since SAAB never even made convertibles at that point, they didn’t walk away from the idea. The idea was never there, to begin with.

Around the time Bob was making a ruckus stateside, SAAB had released the model 900. One of the versions of the car was the ‘notchback.’ It was a barebones, Spartan version of the vehicle. You had two doors, no HVAC, no stereo, manual windows, the works. You might already see where this is going.

That version of SAAB 900 was perfect for the markets of Europe where barebones models were trendy, partially for the lower price and partly due to the whole minimalism thing that was going on over there at the time. However, when SAAB told Sinclair that he had to order 1000 of these cars and sell them stateside, he knew he was in trouble. The new car was alright, but it too light feature-wise.

The US market at the time was in a completely different place. Not only were extra features a must, but one would pay that kind of money for a European vehicle that had literally nothing in it. The average Joe had a few minimum requirements when it came to creature comforts.

Sinclair wasn’t overly happy with the instruction from Sweden. Instead of giving in to these demands, Bob sent back a note of compromise. He would take the new two-door models, but only if they were kitted out with all the features of the higher-end models. The ultimatum was accepted, and he once again made the sale.

Bob had a meeting with his deputy sales manager Sten Lundin. After the new order was placed, the two came together to brainstorm how to sell these vehicles they’ve just ordered. Even with altered specs, Sinclair found the whole concept hard to sell. There were still miles of issues that he thought would trip him up, trying to sell the Notchback.

It’s at this meeting that he had a moment of clarity. He took a photo of the 900 Notchback, a pair of scissors and simply cut off the roof. That photograph was the moment when convertibles came back on the menu at SAAB.
Sinclair quickly instructed his staff to call the HQ back in Sweden and tell them to make all 1000 cars convertibles. 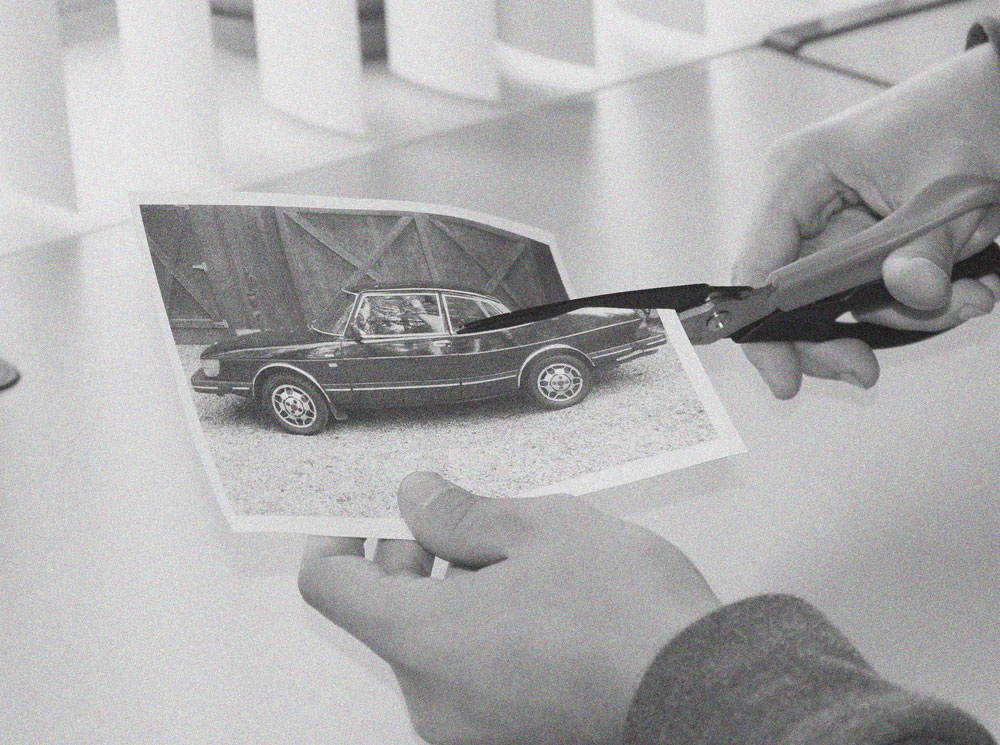 Bumps in the Road

No matter how much pull Bob had with the higher-ups, SAAB engineers never had to make a convertible before. The logistics of designing and manufacturing a convertible roof mechanism simply weren’t there. Although reluctant, the HQ back in Sweden accepted Bob’s request. However, they’ve more or less let him run the project.

Sinclair wanted to get the vehicle ready for the 1983 Frankfurt Auto Show, which left him with little time to make everything happen. Being a pragmatic man himself, Bob quickly networked a solution that came in the form of ASC or American Sunroof Company.

This Michigan-based company took on designing and producing the roof and the convertible mechanism for the prototype. SAAB was left with designing the actual vehicle, which they did in parallel. The development of the chassis and body happened in two locations at the same time.

On the one hand, there was the Trollhättan design department that was headed by Björn Envall. Envall went with a 3-door body that looked promising at first. Then the plant in Finland took the 2-door body and came up with a sleek, attractive design that came on top in the end. 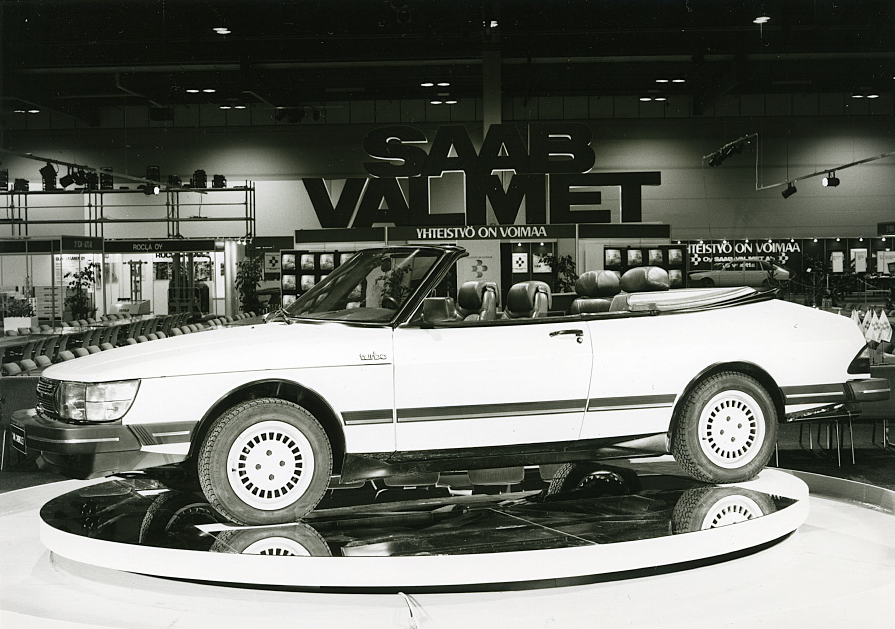 The finished prototype was packed and shipped to Frankfurt. Executed with military precision, the transport phase was a complete success, and the team had managed to get the car in Frankfurt with zero information leaks. No one at the show knew what was coming.

The big reveal was… well, big. Convertibles weren’t all that hot, but SAAB’s creation changed all that. The press went wild, showering the vehicle with accolades. The hype train that was created that day wasn’t stopping anytime, which SAAB quickly found out.

They started getting orders for 900 convertibles that were pushing the production capacities to their limits. The price they’ve selected was competitive, but that didn’t even make a dent in the overall demand. In the end, some 250,000 of these awesome cars were made in the span of two decades. The used market is still reasonably packed with vehicles with relatively low miles in decent enough condition. You can find a good used 900 Convertible at a decent price.

SAAB 900 is still one of the most favorite cars among SAAB fans and car enthusiasts in general. Many would even very much drive a 900 convertible over a 9-3 model any day of the week. As a matter of fact, the 900 Convertible is the central jewel in the crown representing SAAB’s best years. What came after was a slow descent into what feels like oblivion in 2020.

Uncle Bob Sinclair ended his run with SAAB long before GM got their dirty paws over the griffin. He got out on time.
Not only was he spared of watching the downfall of the brand, he largely helped build, but he was also recognized for his efforts. Bob went on to be named ‘the Commander of the Order of the Polar Star.’ No, Bob didn’t go off the deep end into Star Trek fan fiction.

This is a title awarded by Sweden’s King Carl Gustav XVI, and it represents the highest honor that can be bestowed to a non-head of state for contributions to Sweden’s industry, culture, or economy.
Although he’s no longer with us, Uncle Bob’s creations can still be seen on the streets of major cities all over the United States in 2020. The 900 Convertible is the original SAAB convertible and one of the best automotive decisions signed into effect by a pair of all American hands.

6 thoughts on “Story that Precedes the 9-3 Everyone’s Used To: The First SAAB Convertible”