The EGR, or Exhaust Gas Recirculation is a device designed to reduce the exhaust emission values by diverting a fraction of the exhaust gases back into the combustion chamber, thus reducing the amount of nitrous oxide (NOx). It does this by lowering the high combustion temperatures at which nitrogen oxides are formed. EGR filter replacement isn’t a difficult job on average, and it most definitely isn’t a labor-intensive job on a VW 2.0 CR TDI engine. Replacing this filter will greatly improve your VW’s combustion and make your car run better. If it fails and is left unchanged, it will have a negative impact on your car’s performance, as well as air pollution. Today we’ll show you how to change it!

What is an EGR Valve and What Does It Do?

The EGR valve is an electro-pneumatic valve. It’s a part of many modern engines, and is used to control the exhaust gas recirculation process. The EGR system ensures that the fresh air entering the engine mixes with a low amount of burned exhaust gas, thus reducing the combustion temperature and excess oxygen in the engine’s combustion chamber.

The ECU, which calculates all aspects of engine performance, sets the amount of recirculated exhaust to be sent into each cylinder by controlling the EGR valve. However, If the EGR valve is completely closed, the emission values deteriorate, and if it is opened too much, polluted air enters the combustion chamber. This situation causes the amount of oxygen required for combustion to be lost and the operating conditions of the engine to deteriorate.

In modern engines, EGR is designed both to reduce the engine’s suction power and to use the positive effect of waste gas on combustion in certain driving situations.

What Causes the EGR to Fail?

The main causes of EGR failure are wear over time and clogging of the valve due to the accumulation of soot. The electronics or the hose that controls the valve may also become clogged, but this is fairly rare. Sometimes a faulty engine mount can affect the EGR system, causing it to fail. Here’s how to deal with faulty engine mounts on a 2011 Jetta Sportwagon TDI.

The cool thing about owning a VW is that it will flash a warning light on your dash if there’s an EGR-related malfunction. There are also other ways to figure out if your EGR system is failing.

If you can observe any of these symptoms in your Volkswagen, it’s a good idea to check your EGR filter and possibly replace it before it causes any problems for your EGR system.

Some mechanics might offer an EGR valve cancellation (EGR delete, EGR off) if your system gets clogged. However, this will greatly impact your emissions, and could potentially impact your engine’s performance.

How to Change the EGR Filter on a VW 2.0 CR TDI Engine

Let’s say you notice some of the symptoms described above. Although a great many things can lead to similar issues, checking and replacing your EGR filter is arguably one of the simplest, and cheapest things you can try.

Here’s the list of things you’ll need for this job:

Here’s a step-by-step guide on how to change the EGR filter on a VW 2.0 CR TDI engine.

You will only be needing the front of your car lifted, so you can use wheel ramps or jack stands for this project. If you’re using the latter, jack up the car and place your jack stands underneath to ensure safety.

There’s a plastic skid pan under the engine, you’ll need to take that off. Remove four T25 Torx screws from each side and remove another T25 Torx from the middle. There should be three T30 Torx screws across the back. Remove them and the pan should drop easily. 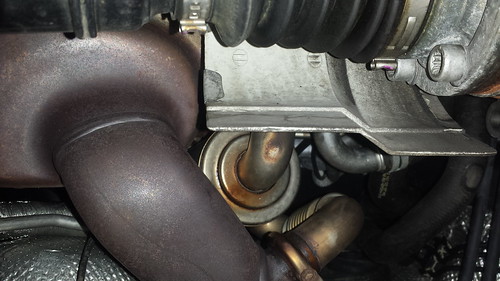 These VW engines have a heat shield that wraps around the top of the passenger side axle. You can remove it by unscrewing two 16 mm bolts and pulling it away. The shield needs to come off as it’s hiding the EGR filter. 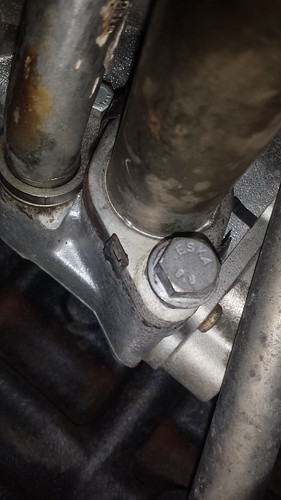 First, unscrew two 13 mm bolts to the back of the engine on the hard pipe. After that remove the v-band clamp between your EGR filter and your DPF (Diesel Particulate Filter) with a T30 Torx. At this point, your EGR filter should only be held in place with a 13 mm nut on top of the bracket. 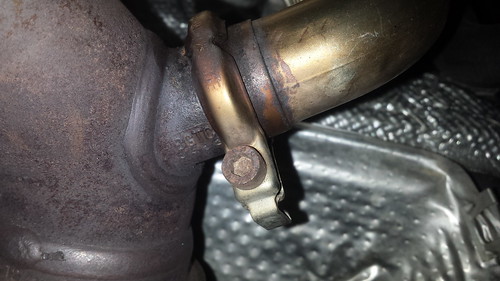 It is not easy to get to this nut, but it can be done from the top of the engine with a 13 mm box wrench. Take that nut off and your filter is free to be removed. Don’t lose the metal gaskets at either end of your EGR filter, you will need them again when you’re reattaching the new one. 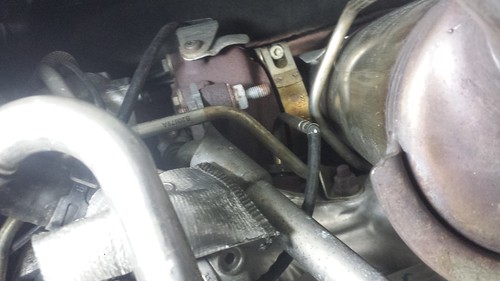 Put your new EGR filter back in its place and attach it with the 13 mm bolt at the top. Don’t tighten the nut until you attach all the nuts and bolts, so you can move the filter around a bit in order to get to the attachments. Slide the metal gaskets back into their place on both ends of the EGR filter and screw the 13 mm bolts at the back of the engine. Reconnect and tighten down the v-clamp. Don’t forget to tighten the nut on top when you are done.

Put the heat shield back on top of the passenger side axle and attach two 16 mm bolts in their places.

Slide the plastic skid pan in its place and attach the T25 Torx screw in the middle, three T30 Torx across the back, and four T25 Torx screws on each side. Tighten everything down.

Check under your car and lower it carefully. You should take a short drive around to check if your car still gives any of the failure signs above. If it doesn’t, you’re good to go!

Where to Get a Replacement EGR Filter?

EGR filter replacement is not a hard job on VW’s 2.0 CR TDI engine, and you can easily do it yourself. You’ll only need this guide and a new EGR filter. It’s not always easy to find the right part for your car, but we can actually help you with that!

Just choose your car’s make and model from the drop-down menu, and you will get a list containing all the specific parts for your engine. VW recommends that you always use genuine or OEM quality parts, and we agree!