Car Heater Blowing Cold Air? Here’s What You Can Do

When October comes with chillier weather, it might get uncomfortable sitting in a car with crispy cool air when you want to be a bit warmer. Unfortunately, many people ignore this issue because it doesn’t affect the way the car drives or handles. Besides, fixing it requires a LOT of work. Or does it? Join us as we go over car heater troubleshooting and discuss how you can fix it affordably. 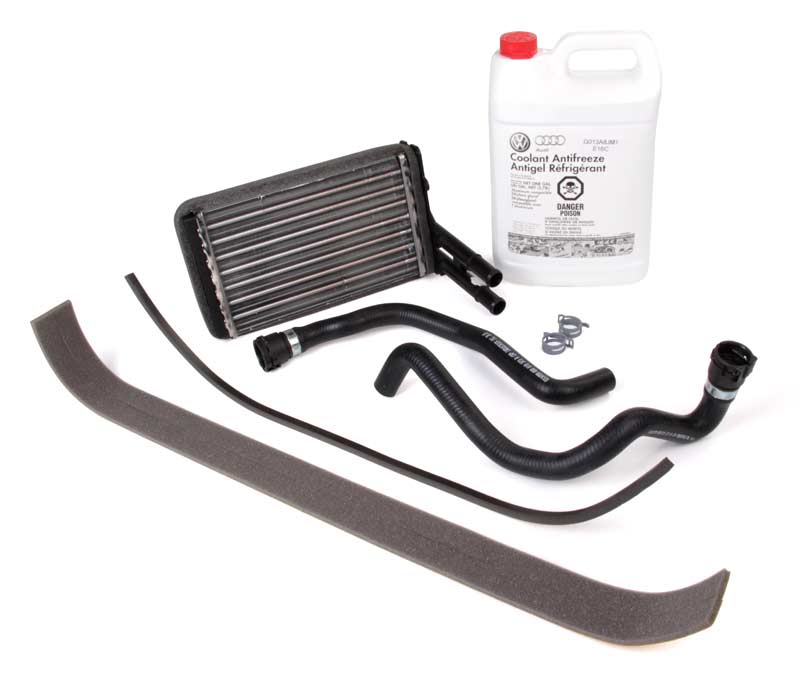 How Does Cabin Heater System Work?

There are numerous reasons why every car should have a fully working cabin heater system. It’s not just meant to keep you warm during cold winter days when you’re commuting to work, even though that’s its primary purpose.

Assuming you have a car with an internal combustion engine (drives on gas or diesel), your car generates heat. Most of this heat is exchanged through the cooling system, which is why you need to have it properly maintained, but a good chunk of it is also used for heating up the cabin.

A car heater blowing cold air as soon as you start the engine is perfectly normal because the coolant hasn’t reached optimal temperature yet. As the engine gets warmer, the thermostat opens up and lets the coolant circulate through the radiator, and later through the heater core, which finally heats up the passenger cabin.

The dials or buttons on your dashboard let you control the temperature inside the passenger cabin by opening and closing the intake of coolant to the heater core and by controlling the fans.

Why is My Car Heater Blowing Cold Air? 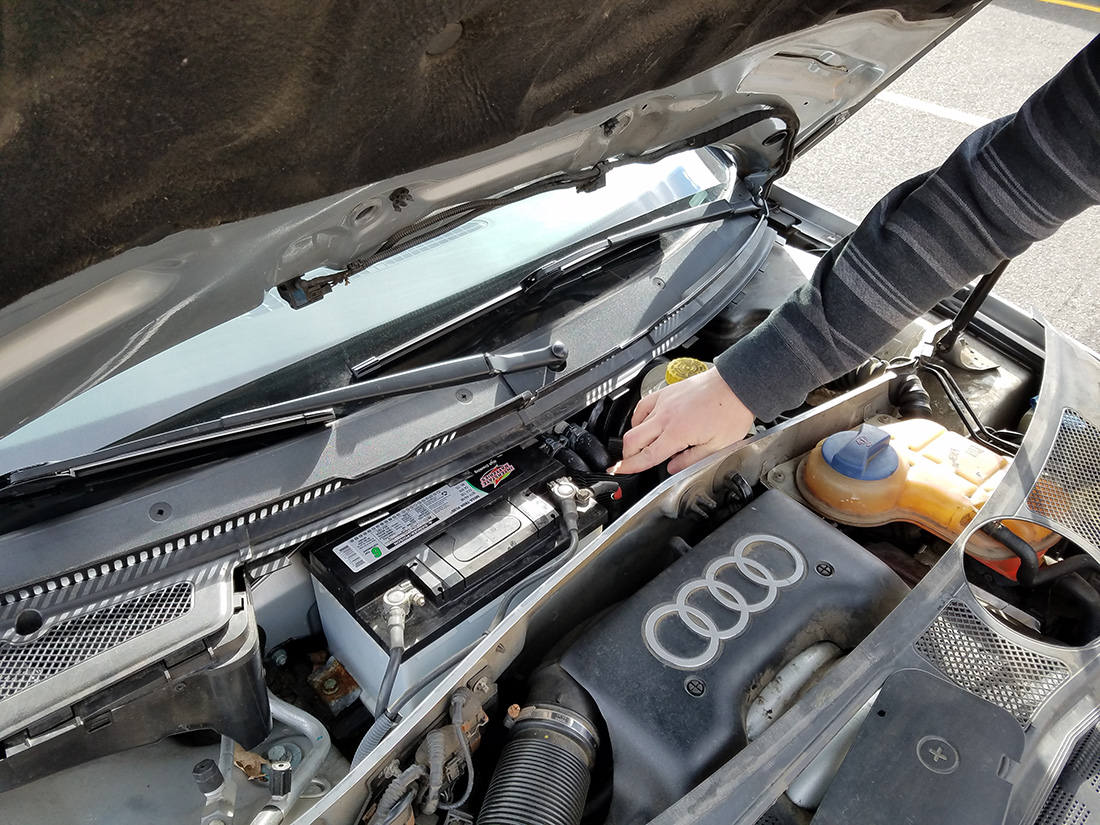 There are a few reasons why a car heater is blowing cold air even after the engine reached its optimal operating temperature. These reasons include:

When it comes to the severity of each fault we mentioned, the worst-case scenario is that your heater core needs replacing. It’s the hardest to reach and requires a lot of work. Most people who have a faulty heater core solve this issue by leaving the car at the car service for a day or two before getting their car back.

Other issues are much easier to resolve because the parts are easier to reach and cost a lot less to fix.

How do I Fix The Heat In My Car? 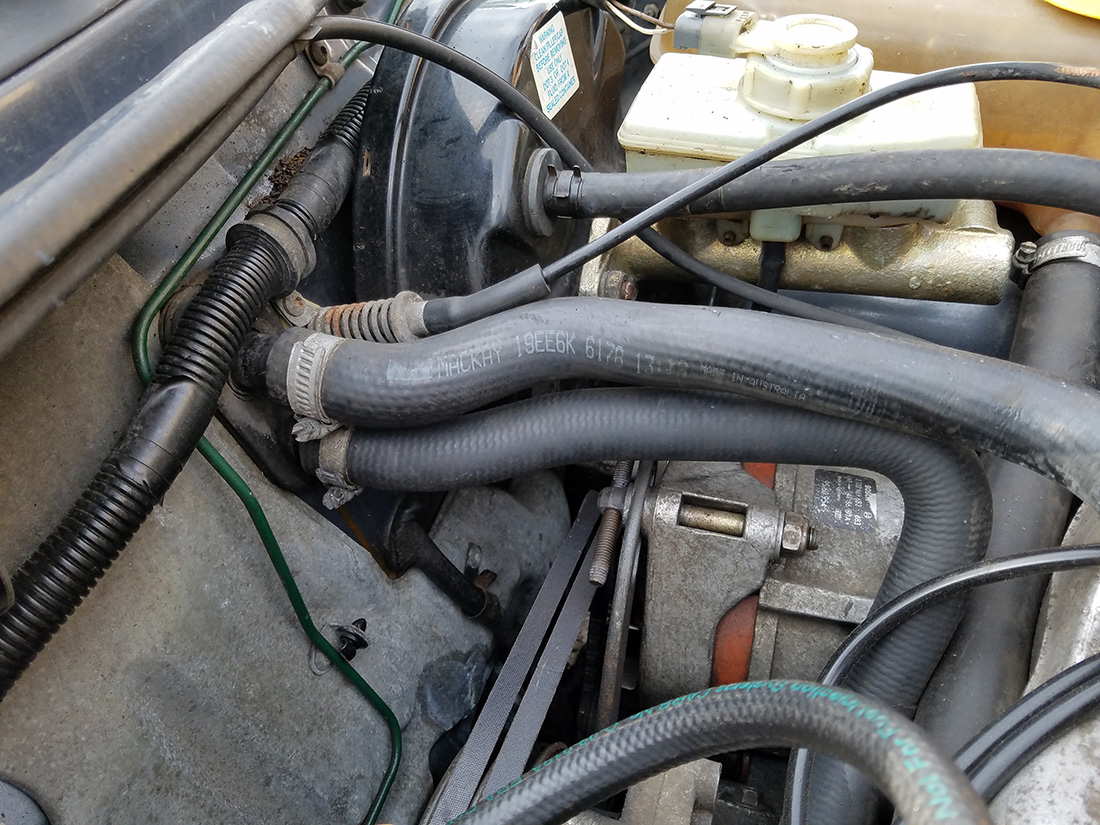 Saab 900 Heater Core Hoses, note there is a valve behind them in this situation.

As mentioned above, there are a couple of common reasons why a car heater is blowing cold air even after the engine reached its operating temperature.

Some issues can be easily fixed, while a few require some mechanical know-how and willingness to get dirty which is why a lot of people leave these issues to professionals with the required tools and equipment.

The easiest and fastest issue to check is the coolant level. Even though most modern cars have sensors that will light up your dash if your coolant levels are low, it’s still a good idea to check the levels yourself because the sensors can be faulty as well.

Some cars are more sensitive than others, so if you notice that the coolant level is below the optimal level, it can be the reason why the car heater is blowing cold air. This is a pretty easy fix, and you don’t need to take your car to the mechanic for this.

The only thing to look out for is finding the right coolant for your car, and not adding more than required. We’ve discussed different coolant types at length, so check out our guide if you’re interested in learning more on this subject! Once you’ve added enough coolant to the system and the engine is at operating temperature, you should feel warm air coming from the vents in the cabin.

Bleeding Out The Cooling System 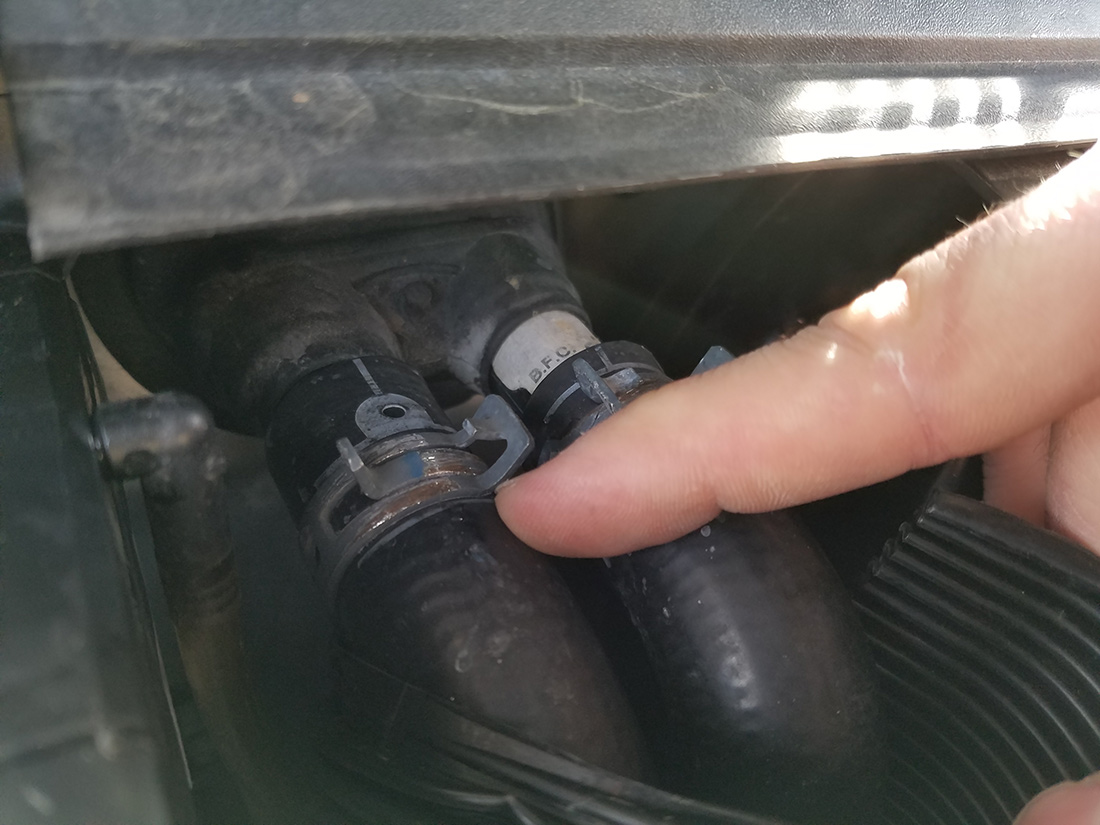 The hole on this hose is meant to bleed bubbles out of the heater core, which can air-lock the system and prevent flow.

If you’re maintaining your car properly, you should check the cooling system every time you do a service or at least once a year. Despite what most car manufacturers say, long-life coolant doesn’t last nearly as long as it should. In most cases, it is good practice to change your coolant every 2-3 years. While changing coolant, there’s a small chance of having pockets of air left behind inside the system if the system hasn’t been bled properly.

Some cars feature a self bleeding cooling system, which makes everything a lot easier. Other cars have bleed valves located at several key points in the car. Bleed valves allow you to release air bubbles from the cooling system just by unscrewing them and waiting until coolant starts coming out. This should only be done when the engine is cold.

With the bleeding valve, or screw lightly unscrewed, turn on the car and let it idle until it reaches operating temperature. Check again if any coolant is missing and add the appropriate amount if needed. Check the coolant level frequently for the next couple of days. If you’ve done the job right, your car will maintain a stable temperature, and you’ll notice that the car heater blowing cold air issue is likely resolved.

A faulty thermostat can be the cause of your car heater blowing cold air, but it can also cause a whole slew of other, more serious problems.

If the thermostat is faulty, you’ll notice your car taking much longer to reach optimal operating temperature, or not reaching it at all if it’s stuck open. On the other hand, it can stay closed which will quickly lead to the engine overheating.

If the thermostat is stuck open, the engine won’t reach the operating temperature which will lead to the car heater blowing cold air. If you notice any of these symptoms, it’s recommended to have a professional troubleshoot the issue, replace the thermostat and replace the coolant.

Although faulty AC controls are rarely the cause of the issue we’re discussing here, it’s still something that can still be the cause of a car heater blowing cold air. If you have a manual AC in your car, you’ll only have dials that you turn to change the ambient temperature from hot to cold. If something is faulty here, it’s much harder to spot the cause of the issue compared to digital ACs. With digital AC controls, every fault will be clearly visible right away. 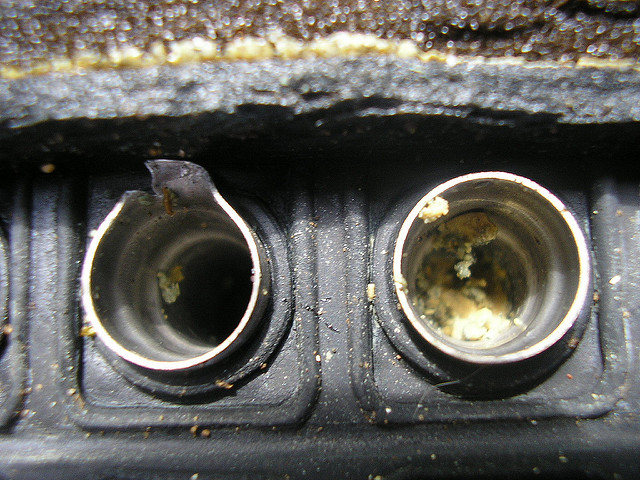 A forum users took this photo of his VW heater core intlet and outlet that had over 200k miles on it without a coolant flush. The accumulation was enough to overpressure and rupture the hose end.

Replacing a heater control panel is usually a straightforward process that requires unscrewing a few bolts and disconnecting the wiring from the old panel and connecting it to the new one.

The heater core is one of the things you don’t want to deal with, and also the first thing to check when preparing your car for winter. The replacement process for the heater core is pretty complicated, mainly because it’s located between the cabin and the engine, deep under your dash. In most cars, the dashboard needs to be removed to get access to the heater core.

The symptoms of a faulty heater core include:

If you notice any of these symptoms, and you’ve done your part on the troubleshooting end, the best thing you can do is take your car to a certified professional who will check if the heater core needs replacing, and replace it if necessary.

Is Your Car Heater Blowing Cold Air? Fix It With Quality Parts

Now that you know what are the causes behind a car heater blowing cold air, it’s much easier to troubleshoot the issue and make sure which part needs to be replaced. If you notice your heater core is leaking or faulty, make sure to check out our website. Here at eEuroparts.com, we carry a wide array of OEM parts for your car’s heating system.