Wheel bearings are arguably among the most important components in any car. After all, these bearings are what allow the wheels to spin freely. When one goes bad, it can cause all kinds of trouble ranging from annoying noises to more serious issues. Join us as we go over the wheel bearing replacement process and more.

We’ll also discuss what wheel bearings are, how to diagnose a failing one, and much more. Let’s jump right in.

What is a Wheel Bearing?

Friction is the enemy of any mechanical component that rotates at high speeds. The same goes for the wheels on your car. A wheel bearing is a device the ensures smooth rotation with a minimal amount of friction.

The way wheel bearings work is fairly simple and akin to any other type of bearing. You’ve got a set of metal balls that are sandwiched between the outer and inner race. These may or may not be affixed to different mechanical components. By having a set of smooth, polished ball bearings between the two races, you’re ensuring that the least amount of friction is being transferred from the wheel to the hub. Oh, and these metal balls are drenched in grease.

That being said, we should observe wheel bearings as a part of a larger assembly on a vehicle. It’s a core component of a wheel hub, which essentially allows you to have a free-spinning wheel while also accounting for suspension and braking components.

If you think about it, cars would be far less fun to drive if the struts, brake calipers, A-arms, and other components were spinning along with the wheel.

Although invented to reduce the amount of friction, wheel bearings can’t eliminate friction. There are numerous reasons why a bearing could fail and take the whole assembly down with it. Sometimes all it takes is gravity.

Your average bearing is built to last approximately 100,000 miles. Considering how fast they spin and how often we drive, those 100,000 miles is a massive figure for what is essentially two pieces of metal rubbing against each other ever so slightly.

Material fatigue aside, here are several abnormal reasons why your wheel bearing might fail.

One of the most common causes for wheel bearing failure is the contamination of the bearings. Much like the rest of the wheel hub assembly, the bearings themselves are designed to be non-serviceable. Because of that, they are greased and vacuum-sealed, preventing any air or debris from entering the bearings.

Every seal on any mechanical component has its limits. Once the seal goes bad on a wheel bearing, it will break the vacuum and allow all kinds of debris to contaminate the space between the bearings and the races.

Once you have physical particles of dust and other debris inside a bearing, you’ll see a spike in friction. From that point on, the bearing itself doesn’t last too long. The metallic spheres will start to change shape due to abrasion, causing the entire bearing to fall apart eventually.

Driving on the Moon

Not all of us are fortunate enough to drive on the German autobahn network’s surgically flat roads. In fact, most of us are forced to drive on what appears to be the surface of the Moon (looking at you, Detroit).

If your daily commute requires you to drive over bumps at relatively high speeds, it’s not just your shocks and springs that will eventually go bad. Your bearings will suffer as well. There isn’t really much you can do about it except to reduce the speeds with which you hit potholes.

Even so, you ought to prepare for a wheel bearing replacement sometime in your future.

If you’re always driving around with low pressure in your tires, that could put the entire hub assembly under more load than it’s meant to take. The first thing that goes under such driving conditions is the bearings. Maintaining proper tire pressure is essential for several other reasons, but you can wheel bearing maintenance on that list as well.

Symptoms of a Bad Wheel Bearing

There are several symptoms of a bad wheel bearing. For the most part, it’s easy to diagnose this issue since it’s so unique how it manifests itself.

How to Replace the Wheel Bearings on Your Car?

Now that we know what wheel bearings are, why they go bad, and how to tell if you have a bad one, let’s find out how to replace them. This is where things get interesting.

On older cars, such as the SAAB 900 we’ll use later on for our guide, you can pop the wheel bearings from the wheel hub, making the entire repair reasonably cheap. On the other hand, modern vehicles have wheel bearings integrated into hub assemblies. In that case, you’ll need to get a whole new hub assembly.

A Word on Wheel Hub Assemblies

As mentioned before, modern wheel hub assemblies are designed to be maintenance-free along with the bearings pressed into them. That, on paper, simplifies things. However, they’ve also become more complex over time.

One of the most common mistakes people make when replacing the entire hub assembly is to go for the cheapest one they can find. After all, it’s just a piece of metal, right?

Not really, no. Modern wheel hub assemblies come with built-in ABS sensors. The cheap ones you can get for dimes on the dollar don’t. Not only will your ABS not work properly, but you’re also getting a cheap bearing that won’t last you anywhere near as much as a regular OEM part will.

Alright, with the modern stuff out of the way, let’s address replacing a wheel bearing on an older vehicle such as the 1986 SAAB 900. Mind you, the process is more or less the same for other cars of this vintage.

Here are the tools necessary for this job:

Step 1 – Remove the Assembly from the Vehicle

In the case of our SAAB here, removing the entire hub assembly is the best way to access the bearing and change it. You can get the whole thing done on some vehicles, given that you have the necessary tools.

In our case, it was much easier to take the whole thing off and then use a hydraulic press to remove the bearings.

Now that the hub is off the vehicle, go ahead and remove the calipers and the rotors.

Next, take a punch and loosen up the first snap ring. This will allow you to remove the ball joints using nothing more than a link and a hammer. On the other hand, if the ball joints are in a bad way, you’re probably in for a fight.

Step 3 – Remove the Splined Part of the Hub

The splined part of the hub connected to the bearing’s inner race has to go. You can remove it either by pressing it out using specialized tools or using an appropriately sized socket and a hammer. Just remember to secure the steering knuckle in place with a vice when you attempt this.

What’s left to do now is remove the brake dust shield from the assembly, revealing what’s left of the old bearing. Remove the leftover race with a press, inspect the hub and press in a new bearing.

From there, simply repeat the process in reverse until you’ve completely assembled the hub. 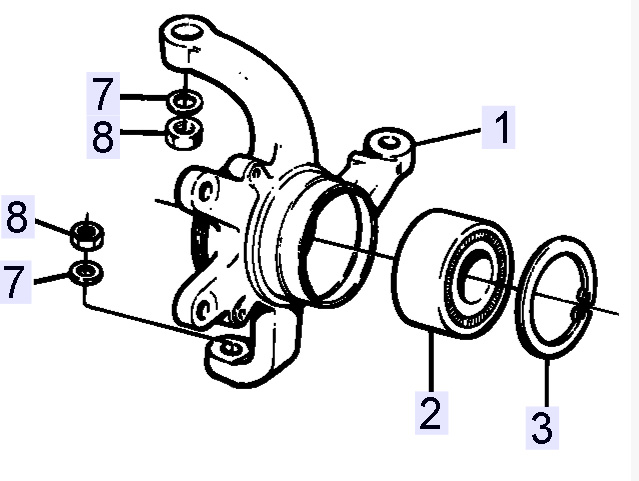 A sealed bearing is always housed inside the steering knuckle. The hub is pressed on to the inside, and the axle passes through the entire assembly.

Here at eEuroparts.com, we still carry a variety of quality wheel bearings for older vehicles and new ones. To find the product that best fits your car, simply input your vehicle’s make and model into our navigation tool, and you’ll get a complete list of matching parts.

Additionally, you can always get in touch with our customer support service. We have knowledgeable professionals standing by to offer assistance and answer whatever questions you might have regarding our offer.