How To Tell If Your Engine Mounts Are Bad

Being such a critical component, your car’s engine gets special treatment when being bolted into your frame.  The engine and transmission are all connected to the body with a series of rubber bushings called mounts.  Each engine mount or transmission mount is specially designed to absorb load, protect the mounting bolts and brackets, and insulate the car from vibration.  That way, your horsepower can go straight to the ground, instead of prying your engine out of the engine bay.  Since they are made of flexible rubber, they naturally deteriorate, causing bad things to happen.

Usually around 100-150k miles, you’ll start to notice some strange feelings when you pick up the pace on the road.  This is especially true if you have a manual transmission car.  When the mounts are really bad, the engine will use the axles like a lever to try and lift itself up.  When the engine shifts gears, or you lift off the gas, the engine will fall back down and result in a bang.  This motion will further tear the mounts and leave your engine freedom to rumble and bang around under the hood.  The video below is a good demonstration of what this actually looks like.

There’s more than just an uncomfortable feeling when you drive around with bad engine mounts, however.  This extra movement is bad for everything attached to the engine, including CV joints that are moving more than they are designed to, intake and exhaust tubing, wiring harnesses, fluid lines, and shift linkages. 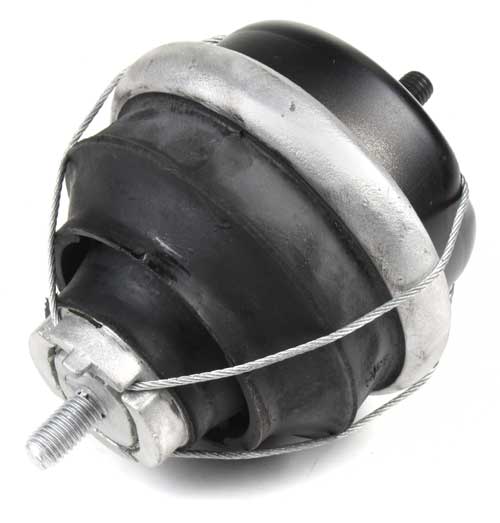 If you have a bad transmission mount, expect your shifts to feel imprecise.  Occasionally this will be so bad you will fail to find gears under heavy torque loads (think stop light launches in 1st gear).  Modern main engine mounts (the ones under the engine taking most of the load) are usually filled with hydraulic fluid.  These hydraulic engine mounts are designed to provide extra cushioning, to insulate the cabin from vibration.

To the right is a photo of one of these hydraulic mounts, where you can clearly see a metal cable attached around it.  This is to limit the movement of the engine in case the mount breaks, to prevent damage to connected components.  When they get old, the mounts can break or tear, causing leaks and usually separation due to lack of solid rubber.

When engine mounts go bad, in addition to the flopping and banging when applying torque, you will notice an increase in vibration at idle.  When you do, it’s a good idea to test the mounts in your car by holding the brakes on and applying throttle.  You can observe if the engine is moving around a lot, usually more than an inch of movement is an indication to start inspecting mounts.  Bad engine mounts will look torn, broken, or separated.

A few automobile manufacturers have recently gotten fancy with their engine mounts, like the one shown below.  We noticed that there were actual electrical connections coming out of these, which is pretty curious when you understand the job of an engine mount is to be a large bushing with a few bolts through it.  These mounts can change their stiffness based on RPM.  They are a soft cushion at idle, but when you hit the gas, they stiffen, allowing more feedback and a tighter feel.  There are a number of approaches to the active engine mount, including Lexus using a counter vibration device to work like a noise cancelling headphone, as well as non-US BMW Diesels using vacuum controlled active mounts that soften at idle due to the inherent vibrations of that type of engine.  If they don’t hold vacuum then they are not good. 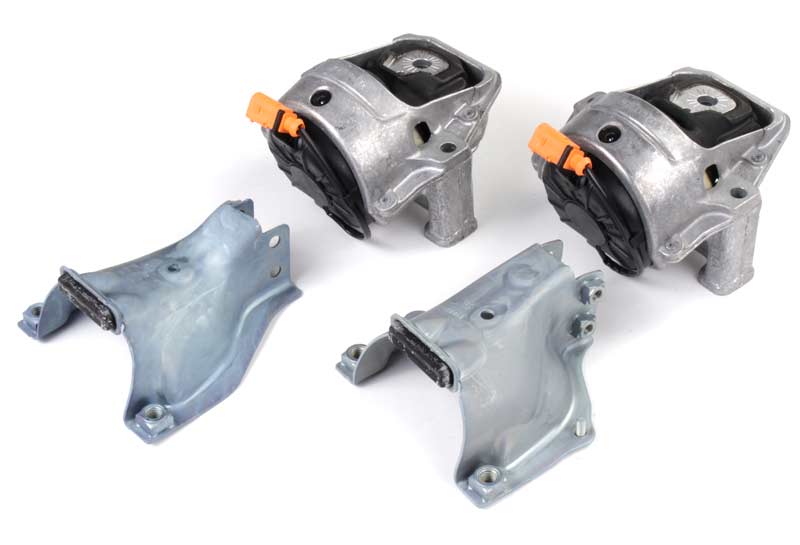 So if your car has over 100k miles on it, start paying attention to the way the engine feels.  Does it vibrate?  Do you hear or feel a physical bump or bang when you lift off the throttle?  If so, it’s time to replace engine mounts before it gets so bad that you damage other parts.  eEuroparts.com carries engine mounts for nearly every car we support, and some are more common to replace than others.  If your car has a messed up engine mount that we don’t currently have on the website, CONTACT US!  We will have it up on the site in no time so you can get your parts fast.