They don’t make them like they used to. Although overused by now, this phrase is definitely fitting when you look at some modern Mercedes Benz vehicles. This brand has retained its status as a premium manufacturer, but they, just like most automotive industries, started cutting corners about a decade or so ago. As a result, many loyal customers were left with what is now known as the Mercedes intake manifold failure issue. Our goal today is to explain what causes this annoying issue, how to diagnose it, and finally, how to fix it by yourself.

Variable intakes are nothing new nor unique to Mercedes Benz. Many other brands have been using similar technologies for decades. Coincidentally, most of them had similar issues. Before we dig deeper into that subject, we need to set the stage. More specifically, we need to understand how the intake manifold on the affected M272 and M273 Mercedes engines (among others) works.

Air is an absolutely essential part of combustion and hence the overall operation of any internal combustion engine. However, just getting air in there isn’t enough. Over time, engineers have found that timing the moment when the air reaches the intake valves can significantly improve several performance parameters of an engine. You can get better power in the lower RPM range, better fuel economy, overall better efficiency, and more.

The way Mercedes has achieved variable intake timing is by using short and long runners. An intake runner is a tube that leads air from the intake port to the cylinder head. As the intake valve closes, the air going into the engine hits the back of the valve and is diverted back up the runners into the manifold. In a perfect world, you’d want the air to come back to the intake valves just as they’re opening up. Doing so will ensure that the densest air is getting into the cylinder.

The Art of Scavenging

This is called scavenging (or Helmholtz resonance for those more scientifically inclined).
One way to do this is to lengthen or shorten the runners. If you time everything right, you can achieve the scavenging effect at different parts of the RPM range. Unfortunately, you can’t ensure scavenging across the entire RPM range. For most road cars, you’re looking at a narrow band of around 3,000 to 4,000 RPM.

The situation is different for high-performance engines, which are often tuned so that optimal scavenging happens much higher in the RPM range. Doing so ensures peak intake values when you hit the power band.

Mercedes Benz 3.0 and 3.5-liter V6 and V8 engines (M272 and M273) are fitted with a variable intake manifold that includes a set of long and short runners. Mercedes has used a series of flaps and an actuating mechanism to bridge these runners, changing the distance air needs to travel to reach intake valves.

For whatever reason, engineers at Mercedes Benz have decided to make this entire assembly out of plastics. When we said they don’t make them like they used to, this is what we meant. Although modern composite materials are fairly durable, whatever Mercedes has used to make variable intake mechanisms isn’t all that impressive.

These parts, much like other plastics within the engine, tend to get brittle over time. Endless heat cycles, friction, and other factors will eventually push any type of plastics to the brink of its durability.

As it is the case with most intake manifolds, they tend to gunk up over time. We can thank the PCV system for this particular instance, which is a fairly standard affair in these engines. That being said, once the gunk starts to build up, the swirl flap is forced to work against increased resistance.

Given enough time, the flap will reach a point where the resistance is too much. Interestingly enough, it’s not the flap that goes first, but rather the cam lever that activates it. The lever is, you’ve guessed it, made of plastics. The result is a stuck flap and an engine that has suddenly lost its ability to fine-tune intake timing.

Cam Lever Repair and Other Remedies

Sorting this issue comes down to replacing the entire actuating assembly. You’d think that going for an OEM part in 2020, all this time after the issue was first recognized, would ultimately save you from a headache down the line. Unfortunately, that’s not the case.

The OEM part brings just more of the same. Instead, there are repair kits that will replace all of the affected components with ones made of aluminum. Needless to say, the aluminum arm will outlast any plastic part, no matter how much of that precious Mercedes engineering went into it.

We offer quality repair kits that are designed to replace all of the problematic parts with durable replacements. All of these components meet and exceed OEM spec, so there’s nothing to worry about in terms of performance.

However, you’ll need a few more accessories aside from the kit itself. We strongly suggest that you get both the driver side intake gasket and the passenger side intake gasket. Furthermore, performing this repair is an excellent moment to swap the intake manifold bolts for a new set. Keep in mind that linked accessories are for the M272 V6. Consult our part finder tool to locate gaskets and bolts for the M273 V8.

Repairing the intake manifold on these engines is a perfect DIY project for those who aren’t afraid to get their hands dirty. Just make sure to stock up on patience. We won’t go too much into detail on the replacement procedure as we’ve written a complete guide that you can check out here!

Without being redundant, we’ll address some potential issues that might come up during the repair process.
Over time, it has become apparent that cleaning the intake manifold is an essential but often overlooked part of the process. Replacing what’s broken will solve the lack of variable intake timing, but it won’t help the swirl flap move freely again.

Therefore, you’ll have to pop the manifold and give everything a thorough cleaning. If you decide to fix the intake on your own, you probably know this. However, what you may not know is that removing the intake needs to be done with much more care than most think.

An average manifold is packed with crud and gunk. In some cases, it’s this crud and gunk that keep everything sealed up. What you want to be extra careful with is making sure that none of that crud falls into the engine.
Although it sounds simple, preventing debris from entering the engine is much harder than it seems. One of our readers, Mark, has suggested blowing the surrounding area with compressed air before intake removal. This way, you’ll blow away most of the potential contaminants.

In addition to this, we strongly suggest using paper towels to plug up all of the ports before blasting them with air. You might find that dry blasting works, but that WD40 is also useful at times. At least it was for our reader Mark who was kind enough to share this tip with us. We’ll attach his message at the bottom of the article for reference. 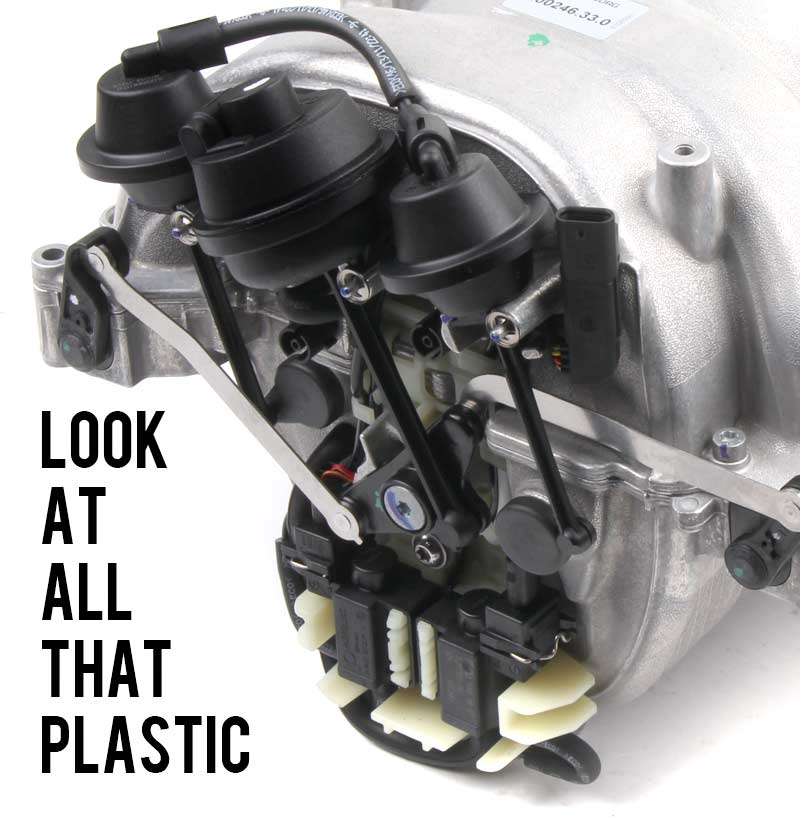 How to Prevent Crud and Gunk from Forming in the Manifold?

The main culprit and the reason why your flap is not opening freely is the PCV system. While there’s not much, you can do in terms of how this valve works, and you can help it stay clean by only using quality engine oils and ensuring that you change said oil on time.

We strongly recommend Motul engine oils that match your engine code. Motul and Mercedes Benz have been working together on a line of brand-specific and general-purpose high-quality lubricants. Using Motul is an excellent way to keep any potential issues at bay.

How to Find Quality Replacement Parts for your Mercedes Benz?

Here at eEuroparts.com, we take great pride in being one of the premier suppliers of genuine parts for various European vehicle brands. Mercedes Benz is right there with other core brands. To find parts that fit your Mercedes, simply select your vehicle’s make, model, and year over at our online store. Our system will give you a complete list of parts that match and more!

In case you have any questions regarding the availability of parts, or whether they fit your specific vehicle, feel free to get in touch with us. You can reach us via email or by giving us a call. We’re standing at your service and will offer assistance with whatever question you have!

“I do have to point out one major problem I found that was totally disregarded in any of the numerous written and video tutorials about pulling and replacing the Mercedes intake manifold (All were otherwise extremely helpful) and that has to do with dirt and grime falling into the intake ports during the removal of the manifold. No matter how much you try to keep things clean, I believe the layout makes it impossible to keep engine crud from falling in there. And I’m talking small sand and pebbles included. A disaster waiting to happen if not removed. I had been vacuuming all around the engine before and after I pulled the manifold, but the vacuum would not get anything out from the ports and on the valves. I found that works were to take an air gun, stick it way in, and blast around each valve numerous times, both dry and with some WD40 sprayed in there.

Make sure you have a wad of paper towel stuffed in each other port that you are not blasting and keep another big wad in your other hand positioned right over the port that you are blasting to catch most of the stuff that comes out, especially when blasting after spraying the WD40. It can be a total mess otherwise. Again, do this multiple times until you see that the valves and ports are totally clean. The area of concern beyond that is how clean you can get the cylinder(s) that happened to have its valves open when you pulled the manifold. I blasted that twice as much as the others. Don’t know what was actually left in there, and maybe it would have been a good idea to have pulled the spark plug, so the crud had another way to escape, but so far, the vehicle is running well. I’m hoping whatever went in was either blasted out or pushed out the exhaust by now. Fingers crossed.

The result of fixing the Mercedes Benz intake manifold problem and replacing its coils and spark plugs is a vehicle that idles smoother than it ever did (50.k miles since bought) and so far runs excellent. Thanks again for your help. I hope my experience here helps someone else as they come across the same situation.”