Most of us have been there before.  It’s the last nut, you’ve almost got the manifold off, then snap.  The clock in your head instantly jumps back, postponing your original estimated time of completion.  It’s a common occurrence in classic cars to have at least one exhaust studs broken at the exhaust manifold. The most common places for this to occur are closer to a turbo charger or heat source that makes the metal more brittle over time. Once an exhaust stud is broken, it leaves a weak spot where a gap can occur in the manifold gasket that will eventually lead to a leak as the gasket comes apart. One simple method of prevention is to tighten the nuts on the manifold studs once a year or so just to make sure that engine vibration has not cause them to loosen – if they are tight, they are less likely to break.

If one does break off, you may still have a chance to get it out easily if there is enough extruding to grasp onto. I have had good luck using Vice Grips or Robogrip pliers to turn them out. If one is broken off deep inside, you will have to use a different approach to extract it. Here is what has worked for me:

How to Remove a Broken Exhaust Stud

-Take a metal punch and a dead-blow hammer (or whatever will fit in the engine bay), and give the broken stud a good strong hit with the hammer down the middle to un-seize the threads, while simultaneously creating a divot in the center of the stud for the drill bit to fall into.

-Using the correct size drill bit (usually a pretty small one – it should say what size to use on the stud remover), drill as deep into the center of the broken stud as you can. Try not to let the bit stray and damage the threads or the head itself.

–Using an extractor (which is reverse-threaded), insert the bit into the drilled pilot hole and start reverse-threading it by hand until it starts to catch. Then twist out the stud. Typical problems occur when the pilot hole is not deep enough, or the bits are too dull. If your stud just won’t turn, try pounding it again with the hammer to loosen it up. A good rust penetrator like Wurth Rost Off paired with high heat will help tremendously.  Just don’t breathe the fumes!

How to Remove an Exhaust Stud

To remove a complete stud, just thread two nuts onto the stud as far down as you can to reduce the threat of breaking the stud under torque (the photo below shows the nuts on the end, which as far as I could get it, this does increase risk of twisting). Holding the upper nut still with a wrench as a stopper, loosen the lower nut until it catches the upper nut and turns the entire stud with it. Keep going until it is out.  If you feel like you are applying more force than you are comfortable with, let the studs all soak in penetrating oil for awhile before you do the job.  If that isn’t enough, applying heat from a torch is common practice.

The top nut keeps the bottom one from spinning as you apply force.

How to Install a New Exhaust Stud

To install a new stud, thread two nuts onto the stud like you did when removing, and holding the lower nut still with a wrench, tighten down the upper nut until it catches the lower nut and rotates the entire stud. Thread it all the way to the end.  Do not use threadlocker. 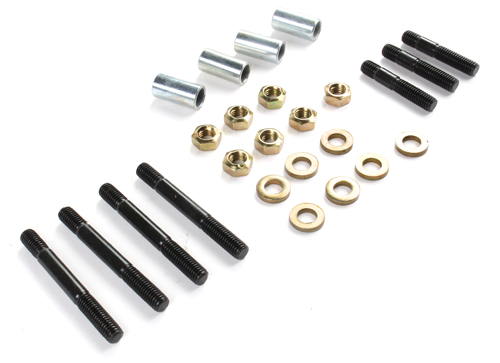 eEuroparts carries a full line of exhaust manifold gaskets and exhaust studs, and stud kits to fit your vehicle.  If you are going to be doing a headgasket anytime soon, it’s good insurance to have a stud or two ready just in case, or just bank on swapping the studs out for fresh hardware that hasn’t gone through the million heat cycles your OEM stuff has.  That way, if you ever have to go in there again, the chances of breaking a stud nearly go away.

One thought on “Strategies For Removing Broken Exhaust Studs”